(you can say that again)

I think I actually spent about 75% of my day at work yesterday on the verge of tears. I'm just so frustrated with the learning curve. It gets discouraging to be corrected all day. It's all part of the continuing student atmosphere, and I know it will be good for me in the end. I respect and like the people I'm working with. I'm just having a hard time finding the balance between developing my own style as a clinician and learning to do things the way they want me to do them. I have no problem taking constructive criticism for the things that I don't know how to do. But the few things I actually feel competent...those are the things that are upsetting me because then the criticism is so unexpected. I'm sure next week will be better.

But that's not now, that's then!

Last night was our last night housesitting. It will be soooooo good to sleep in my own bed tonight! The cats will be happy, too. I love Joe, and I actually don't mind walking him at 6:00 am when I've gotten enough sleep, but I could not sleep well at their house. Part of it was that DH has been so busy with school that he was usually out studying at a coffee shop and going to bed alone in a strange house is a little scary. Also, I needed their ceiling fan on to stay cool enough, but it has this arhythmic ticking noise that was driving me crazy. Today I napped for about three hours. I haven't been able to sleep during the day for more than an hour in at least six months, so I knew I was exhausted.

I also learned Quicken today. That is, after I spend an hour and a half trying to get the user manual printed out on both sides of the paper. That's not something I've done before with our printer (and it's a slooooow printer), so it was a battle, but I won in the end. I only set up the basic cash flow functions, but I think it will be useful now that I'm taking over managing the finances--trying to give DH less to worry about with school getting so busy.

So yesterday was made up for by a relaxing day today where I actually managed to chill and not overschedule/overplan myself. Tonight we went to watch a friend's soccer game and DH agreed to fill in for them at their next game when they'll be short three players. Yay! I think DH would love playing on a team. He loved it in high school, it would give him great exercise, and get him meeting some new people. I'm not sure why he's resisted it so far; I suspect shyness. Anyway, maybe he'll have enough fun to make him take the plunge.

We also went bowling with the same friends. I got one strike, which is decent for me, pitiful bowler that I am. And we have tentative plans for a pedicure tomorrow morning, followed by "The Notorious Bettie Page" and some wine in the evening.

Kudos to whomever is able to correctly identify the song quoted above.

BTW, I feel soooooo lucky that I was able snag one of the wee wonderfuls pattern books before they sold out! I actually had to devise a delicately-executed plan with my husband in order to place the order as I had to be in the car en route to work when they went on sale. He, of course, came through 100%. I can't wait until my machine comes back! 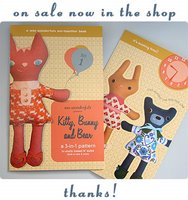 Are you talking about your Annie reference? I got that right away...but I'm one of the ones who has ten minute movie quote conversations, so it's natural to remember all the words to Annie.