There'll Soon Be a Method to the Madness

Alas, almost a week with no posting. After the big to-do I made last time about finally being able to post pics again, too.

As you know, the sewing machine bug hit our house and it's been at the repair shop all week. The estimate was ~$100, but the machine (White 1740) is only worth ~$150, so I'm trying to decide whether to repair it or upgrade a bit. I haven't had horrible problems with it, but the problems I do have, I expect are going to bother me more as I become more skilled at sewing. Also, what if it breaks down again? I've had it for about three years, but those were the three years I've been in grad school, so really it's been used very little. Probably less than a year's worth of weekly sewing. And, the gear that broke was the stitch pattern selector, probably the least-used feature thus far. My husband wants to ask them if they'll order the gear and let him try his hand at the labor. This makes me wary.

I've also discovered that I think I have an emotional attachment to the machine. I've been looking into others (Brother CS6000t), in case I do decide to spring for a new one, and found one that looks better for about the same price as mine. But I hesitate to take the plunge and bring this strange, new machine into my home. What if it doesn't like me? My husband finds it amusing and has reminded me of the old Prelude he used to drive in college and how it hated me and yet I loved it still and was sad to see it go. Yes, I know this is crazy. Welcome to my head.

So, without the sewing machine, I shifted my attention elsewhere and it landed on the abominable mess that has been my craft bookshelf these past three years. I began a massive overhaul of it's current structure, much to the chagrin of my husband who could barely make it across the floor to his computer, which shares the same room, due to the sprawling wreckage of what I had unloaded from the shelves. I told him that he needed to work on his flexibility, both physical and mental.

I am nowhere near done yet, but my fabric is now sorted into large, medium, small, and tiny pieces, by color and/or theme: 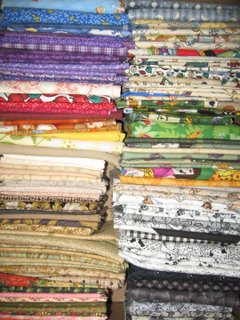 All stored in U-Haul file boxes, which I covered with contact paper (you can, unfortunately, still read the logo through the white paper, but less so). I now seem to be spending our life savings on various sized plastic organizers from Michael's and JoAnn's for the various notions, stamps, paints, pens, paper, etc. that also need homes. I had had them in baskets. The baskets looked nice, but they soon became overstuffed dumping grounds when I didn't know where to put things. The baskets will have to find new homes. Perhaps for bathroom towels?

Today was a day of tedious errands, still not yet complete. Grocery shopping exhausts me, so I was happy to find a sale on at Aeropostale while the watch people were putting a new battery in my watch. Then it was off to JoAnn's for aforementioned plastic storage bins. But, upon arriving home, I have discovered that the shirts I bought DH are too short for his long torso, and when the JoAnn's clerk swapped out my ArtBin for one with a UPC code at the register, she gave me a broken one. So off I go again for multiple returns. The idea of more errands is almost heartbreaking, but I have fortified myself with a Godiva Double Chocolate Raspberry Truffle and some blogging, and so I am ready to face the world again.
at 7:32 PM