There's a little bit of everything going on in this post.

First, a little story. When we were getting ready to welcome Chewy as the newest bundle of fur into our lives, I read lots of puppy training books because I'd never raised a puppy before. I was especially interested in making sure we did crate training correctly because I had seen other people who used it with great success, their dogs retreating to their crates for some privacy and relaxation, their own little "den," whenever they wanted to. These dogs actually like their crates.

When we started crate training, it was frustrating for a while because, although Chewy never fought us when it was time to go in his crate (he's too sweet for that), we had to really lure him in there. Then we had the bright idea to give him treats (not just verbal and tactile praise) every time he went in his crate--and not the cheap-o training treats; we gave him the good stuff: freeze-dried meat, etc. It worked! And he's been consistently going into his crate with the command, "Go to bed!" ever since (except for the occasional confusion of which bed to go to, when he guesses wrong and heads to his bed in our bedroom or the cushion in the living room--and we never call those "bed" by the way; that's his own generalization). 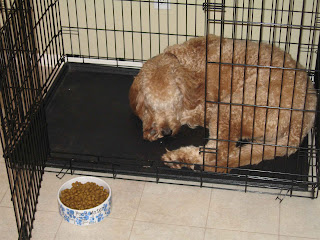 But we've reached a new milestone. This morning I saw him crawl into his crate all on his own while I was innocently fixing myself a glass of water. He's napping in there. Incredible. We did it.

Now for a random rant. Have you seen the new commercials for those "cereal straw" things? I just saw one this morning. Look here to see what I'm talking about. I don't have an inherent problem with the existence of these things, though I hope they'll never make it into my kitchen. But I do have a problem with them being marketed as "cereal." This is a cookie! No? How is this different from those fancy cookies they sell for stirring in your coffee? I think those are maybe solid chocolate in the middle, so not technically a "straw," but these are chocolate-lined. Chocolate has no place in cereal. If there's chocolate, you're having dessert. Or, at best, a snack. Let's face it, the second ingredient in these "cereal straws" is still sugar. I'm just so tired of marketing these days.

Am on the mend from the virus that plagued us last week; although, my sinuses are still driving me crazy with that stuffed-up-but-I-can-still-breathe feeling, accompanied by random periods of suddenly not being able to breathe as my whole head is trying to wring itself out like a sponge. The Husband still isn't 100% either, but we're getting there.

He was a saint this weekend, hanging shelves (which is his most-loathed around-the-house chore), agreeing to paint the nursery next weekend (yay!), planning to build a small bookcase for the wee one. It's a good thing he didn't want to relax or anything, after finishing grad school. What? I gave him two weeks.

Speaking of painting, here's a question I need answering: if you're planning to paint the walls some shade of white, but obviously not white white, and the decor in the room (i.e., the baby bedding) will be a celery green, do you go for one of those whites with a similar green undertone (i.e., match it), or do you go for a shade of white that contrasts (e.g., with blue, pink, or yellow undertones)? It may not even matter. When we moved into this house, the realtor said she would pay for the paint if we wanted to repaint that room. In which case, we'd match the color to the rest of the house. We'll call her today and she if she'll hold to that; we never got it in writing, unfortunately. But I won't be surprised if they don't agree to that and we have to buy our own paint, in which case I'll get whatever color I darn well choose. Except that I know nothing about paint color design and how to get the effect I want. 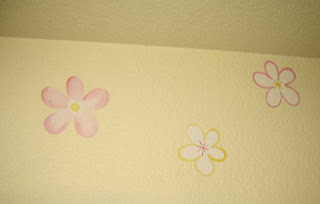 All I know is that the last renters obviously had a little girl in this room, too, because it's yellow with pink wallpaper flowers stuck to it. Not bad, except that the flowers are peeling off and the paint is chipped and I'm not at all sure about this particular shade of yellow...so it's going.

On the sewing front, I have all the cloth wipes stitched up and most of them washed. Just need to tie up and clip some loose threads

on the last batch and figure out a storage system. Then my plan is to finish up the bibs and get started on the hooded towels. I took advantage of some Labor Day sales yesterday and got some

terrycloth for those. Still need to whip up some burp cloths, too. Sounds like a lot (to me at least) when I start listing things, but really those are all quick, easy projects, so I don't think it's as much work as it sounds like. I hope. I'll keep telling myself that anyway.

I didn't work all last week because I was sick. I worked Sunday for a couple hours. Today they don't need me, so I'm home again. I'm thinking this is all just as well as my body has been making it perfectly clear to me that I should have made August my last month at work rather than September. You just never know. As the Husband and I were just discussing, so many women make it all the way up to the end. And not just in desk jobs. Also standing at the grocery check out all day. If I had tried a stunt like that I'm sure I would've ended up on bed rest. So we've been feeling very lucky to be in a financial and professional position where I can stop working this soon.

And I'm finding ways to be productive even while sitting on the couch, heating and icing the back. I spent hours last night trying to be a good Maid of Honor for Scarlet Lily, researching videographers for her in her area. I'd forgotten what a pain in the ass planning a wedding can be. For us, at least, it was definitely all worth it in the end, but, man, that legwork can be excruciating. But she has a nice long list of several plausible options now, and I hope one will work out. Know anyone in the Rochester area with a video camera and some film skills who wants to make a few bucks?

By the way, I hit the jackpot at a yard sale last weekend: tons of baby girl clothes. So I stocked up on the older (mostly six and nine months) sizes that we don't have much of, and scored a ziploc full of baby hats. 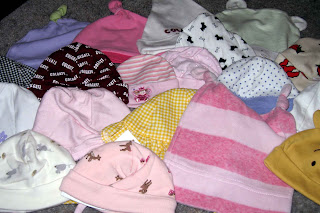 I love the baby hats. Can't get enough. I told the Husband he's going to have to reign me in because she'll never get to wear them all before she grows out of them. I won't even remember all the ones we have now when I'm trying to dress her! Plus, she could be like my nephew, J, who hated hats for the first, I think, year of his life (maybe more?); although, he'll wear them now (that he's over 18 months). But the best baby hats are the ones with ears. Oh, how they kill me. Seriously, how can you resist this? You'd have to be made of stone. 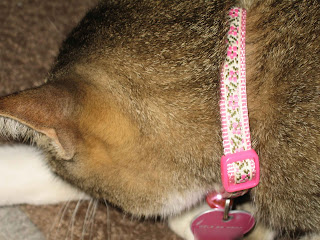 The last bit of news from last weekend: Bob got a new collar.

Email ThisBlogThis!Share to TwitterShare to FacebookShare to Pinterest
Labels: all creatures great and small, crafty like a fox, Papoosekin

the knit hat is adorable. s had a fleece hat and mitten set like that. unfortunately, otis ate one of the mittens...it was cute while it lasted, though. not entirely sure what to tell you about the paint. i'd say it would be better to go with a contrasting undertone to make the green pop. then again, s's walls are yellow, and i love them. i'm no help with this one. i'm glad you're starting to feel better.

Finding the right shade to match might be a real pain (I've gone through 10 different shades of yellow in the past week trying to find the right one) so it might be more fun to contrast. Lighting changes things so much that what matches on those silly cards will look so different on the wall depending on the windows and such. Congrats on Chewy's milestones. Just imagine the joy you will feel when both dog and child go to bed when they are told!