Onesies Coming Out My Earsies

Today's pictures feature some of the worst lighting ever. Sorry. 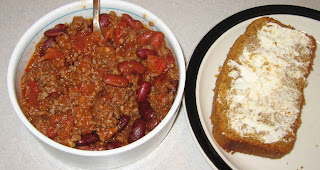 This was a nice chili and cornbread dinner the Husband and I had last night. The chili is a Cincinnati Chili, according to Cooking Light. I didn't know what that meant before I made it, but apparently it means it's served over pasta. That seems like an overkill of carbs when already served with cornbread, but maybe we'll try it when we're out of cornbread. The cornbread included molasses among the ingredients, which was a nice tough with the spices in the chili. 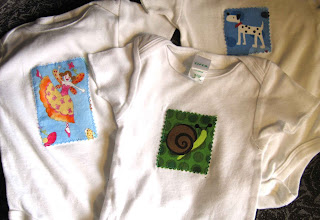 I speant a few hours today churning out a ton of onesies. Some for my baby girl-on-the-way, some for the Husband's cousin's baby boy-on-the-way. I think I have easily over a dozen onesies at this point. And that's just in the 0-3 month range. This kid will not be wanting for clothes. 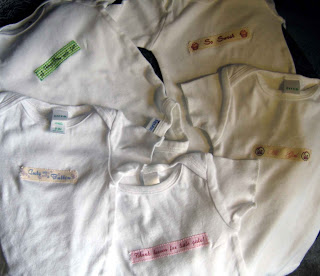 I'm off to meet the Husband for dinner at a friend's house. Four days until he's done his MBA!
at 6:18 PM

Oh. My. Gosh!! I am psychotically in LOVE with those onsies!!! Particularly the snail and the puppy. If you've noticed - people pay the most money for the simplest things. You should set up a table with your mom and sell those babies! Or teach me how to do that when you're here in two weeks and I'll steal the idea :)

Oh they look wonderful! Don't forget to make some in a bigger size too, because I'd lay bets on not having a lot of crafting time between birth and your little angel hitting the 3-6 month size!