Wait, don't leave! It's still me. Maybe harder to recognize, as I've been fooling around with my template. It's been over a year. It seemed like time to shake things up a bit. I made the title banner myself. It's nothing impressive, but the first time I've tried to make one from scratch so I'm pretty satisfied.

I caught the Husband's plague and have been home from work all week so far. Not sure tomorrow's looking much more promising. Between that and all the pregnancy aches and pains life continues to consist of many seated activities, like blog design. Also, giving Chewy a haircut. His mohawk was all matted. 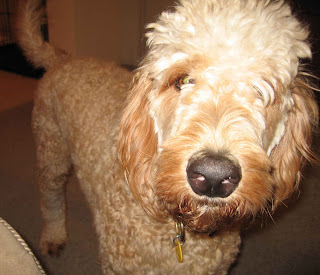 The last time he got shaved at Petco they fluffed up his mohawk so much that we think it caused the fur to get matted. Like 'froing out really coarse hair on a person, then rubbing their head in the carpet (as Chewy likes to do for back massages--in fact, as he's doing right now!). Disaster. So I gave him a haircut with scissors. The mohawk is gone. I think I did a pretty good job blending it in, if I do say so myself. The mats on the back of his head were so bad he has total bald spots, but the fur on top of his head is so long that it flops over and mostly covers it. I've often said that the fur on top looks like a bad toupee. Now it's serving as a pretty good toupee!


I cut out about 17,000 cloth wipes for diapering. Really, about 80. Excessive, I have no doubt. I was only making 60 measuring 8" x 8", which already seemed more than plenty, but then the Husband thought they might be too big...and I had all these scraps...and it was so easy to just fold my template in half and cut out some 8" x 4" pieces. Most of them are cut from old t-shirts in a scrap pile. Some old, dingy, used-to-be-white washcloths also got thrown in the mix. The selection was rounded out by some favorite pajama pants of mine that got bleach-stained long ago and since took up residence in my sewing room, just waiting for such a scrap project. 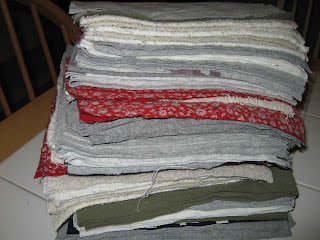 So I have a combination of jersey knit, terry cloth, and flannel wipes, which encompasses most of the options I found for sale on-line. Hopefully they'll work out. The only "problem" I've run into is that the edges are rippling on me when I topstitch them. No matter which stitch I used, and believe me, I think I've tried at least a dozen. This happened both with the knit, which I double-layered, and the terry cloth, which is a single layer. I haven't done the flannel yet. But I decided that the rippling really probably won't matter. These are for the purpose of wiping a baby's butt, after all. Perfection is so not necessary. 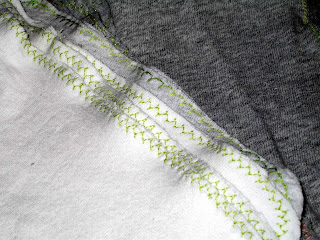 Speaking of less-than-perfection, here's the latest Cooking Light recipe I've tried. I do recommend trying it, but I also recommend keeping in mind that my black bean "patties" turned out more like black bean blobs. Maybe you'll have better luck. It was actually really good; even the Husband liked it and said he'd eat it again! And it was a vegetarian dish; most recent sign that the apocalypse is upon us. No wait, here's the latest sign: he's happily eaten two dishes with spinach in them that I've cooked recently. And he was aware of the spinach. And he complained that the new lady who makes the wraps at the hospital cafeteria where he sometimes gets lunch doesn't put in enough spinach. It doesn't taste as good without the extra spinach. You know, know that I'm actually typing this, I'm thinking the question I should be asking is: WHO IS THIS STRANGE MAN AND WHAT HAS HE DONE WITH MY HUSBAND?
at 6:59 PM

So wait... those are cloths for wiping and not for diapering??? You are WAY more ambitious than I foresee myself being. Kudos!

Have you changed your initials to LTKH and started to save the rainforest as well? I never heard of anyone using cloth wipes, ignorant of me, I know. You might want to keep a box on hand for that middle of the night explosion when you and D realize nobody did the laundry and you have no wipes.

Seriously, somebody has taken over Husband!