The last 24 hours or so have brought a new level of intensity and duration of back pain, along with it's new friends, upper abdominal pain and groin pain. And the three decided to party all night with the result that I think I got about two hours of sleep, collectively. So I was very grumpy this morning getting ready for work, even though I knew I'd only be there a few hours, as I've been doing half-days for a month or so due to this back pain.

A little background about my work: all the therapy services in the hospital (speech, physical, occupational) are required to bill patients/insurance companies on a per unit basis, rather than per hour. That means, if I evaluate someone's swallowing, I bill them a certain number of unity. If I do swallowing therapy, that's a different number. If I do a modified barium swallow (swallowing x-ray) that's another number of units. Etc.

The hospital keeps tabs on us by tracking our "productive hours." We're supposed to bill a certain number of units per hour that we're clocked in as working, and thus getting paid. Usually it's no problem to hit that goal. Most of us are overly productive on most days. But some days just don't go the way you plan and some patients are more time-consuming and complicated than others. This, incidentally, is the same reason you run into problems with your PCP spending maybe 15 minutes with you, if you're lucky. Because they have to jam-pack in so many patients in order to make a profit, so the healthier ones get a drive-by because more time will be spent on the sicker, more complicated patients. They have to bill by units, rather than hours. Unlike lawyers and accountants, for instance, who, much more sensibly, are billed for their time. But enough criticism of health care. That is so beyond the scope of this blog.

Anyway, today was the first time I've ever worked for several hours and not been able to see one single patient! That's okay, it happens. But one patient whom I tried to see today stuck with me. It was the last one I was attempting before I gave up and went home. I was doing the chart review on her and got as far as reading that she had had an emergent c-section with lots of complications, including death of the fetus. She's 37. I stopped there. I cannot think of anything more inappropriate than me, 7 months pregnant, walking into this poor woman's room to address her swallowing. She apparently has some cognitive issues, too--I don't know if she had some sort of anoxic brain injury or what, but she's been combative. I'm sure there's at least some amount of psychological trauma involved. Either way, it was weird. I felt stunned. You know that horrible things happen; of course, I'm more acutely aware of fetal deaths because I'm pregnant. I think it was the close call of me almost going to treat this patient and how potentially painful just the sight of me would have undoubtedly been to this patient, and how traumatic that would have been for both of us.

My point in this long, rambling story is that it made me appreciate how healthy and lucky I am to have had such a relatively easy, problem-free pregnancy (and life) so far. The pain is a nuisance, for sure. But it's a small amount of suffering to bear compared to some.

On a much lighter note and completely different topic, I tried another cornbread recipe (we're still working our way through that damn chili!). The Husband implored me to try a "normal" cornbread recipe this time, and we both found this one to be pretty good. If anyone feels inspired to try it out though, definitely follow the other readers' suggestions regarding halfing the sugar. I did, and still find it on the sweet side. A little too sweet for me, but I know some people like it that way. I also subbed buttermilk for the water. And it's a tad on the dry side, but I couldn't bring myself to follow the other readers' suggestion to increase the butter from 1 stick to 1.5. Ouiser, you're a big user of the applesauce for oil sub; can you sub applesauce for butter? I'm thinking not... Anyway, the cornbread was pretty good. I would make it again, reducing the sugar to a half cup and trying to find someway to make it just a tad more moist.

Now, excuse me while I return to my regularly scheduled plan of sitting on my butt, reading, playing Nintendo, and watching Dr. Phil. Never mind that I have newly purchased 75% off decor fabric screaming to be made into curtains. Never mind that I have lumber sitting in the garage begging to be installed in the laundry room. Never mind that I have nothing to eat for dinner tonight because I can't stay on my feet long enough to make it through a grocery trip, never mind the actual cooking, without making my back situation worse again. Never mind that the bathroom is in such need of a good scrub down that I've started using the guest bathroom instead. Why do they wait until the third trimester, just when you're good an uncomfortable and needing to rest, to really let that nesting instinct kick in. This is just poor planning and foresight.

On the other hand, the Husband should soon be able to help with at least some of that, as tonight is his last night of class! He will officially graduate with his MBA this weekend and I will have a spouse again. I made him celebratory chocolate chip cookies and peanut butter cookies (but pointedly not chocolate chip peanut butter cookies, which he dislikes) last night to share during their final today.

Maybe I should try to take up knitting again. This would be my third or fourth attempt at learning to like it. I find knitting frustrating in much the same way I remember finding ballet when I was very small: I want to get right to the good stuff. I wanted to be en pointe in my first year. "Enough of this stretching crap, let's twirl!" I remember thinking. Likewise, enough little practice squares to measure the gauge. Enough scarves. I want to make these! And these! (Both courtesy of SuperBuzzy, found here.) By the way, I find it really funny that I'm now coveting (along with hoards of other crafters, I know) patterns for nordic products written in Japanese. 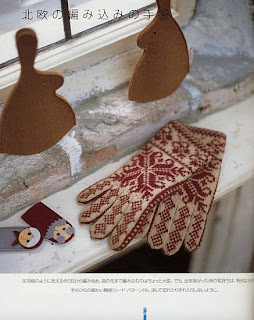 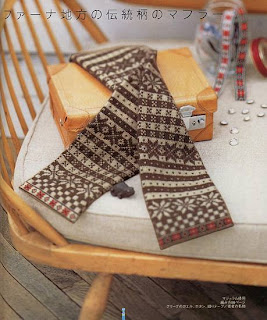 A good dose of perspective is good, even when it's someone else's perspective that they share (so thank you!). It's just so darn easy to get wrapped up in your own life and forget what you really have.

On a lighter note, I was chuckling to myself as I read the tales of you not having the back stamina to go grocery shopping and switching to the guest bathroom b/c of dirt - I share both of those issues sometimes and I'm not preggers! Hehehe...

You sound proper, old fashioned, fed up. But using the guest bathroom is genius!!

And the knitting? Try this freebie pattern for some instant, quick, simple gratification.

Thank goodness for thoughtful, sensitive, respectful people (aka-you!). Even though you didn't see any patients, it was obviously more important you didn't see that one. I'm sorry you're getting to be so uncomfortable, but it's a good thing in disguise! Congrats on making it through D's grad school. What a relief for both of you! Yay!

I was hoping that the back pain had subsided since you hadn't mentioned it in awhile. That really sucks.

As for using applesauce, it can really be used in lieu of whatever fat a recipe calls for- butter, oil, or shortening. However, I wouldn't recommend it for cornbread. It's the equivalent of serving teddy grahams for communion. I'm not sure if it's a southern thing or not, but the secret to good cornbread is bacon grease and a cast iron skillet. Not the healthiest, but it's so worth it. So worth it. I'll email you a recipe.

Smiles and hugs and all that jazz.

they call me Grace said...

I'd like to share with you a little pregnancy hind-sight, if I may. Pregnancy, in so many ways, prepares us for when the little love-bug is out here with us. What I mean is, the fact that you can hardly get anything done now (cleaning, cooking, etc) is really preparing you. Now your not able to get it done because of pain (which, my heart is with you on that. I hope it gets better!). But, later, after the love-bug is out, although you'll have the physical ability to do those things, you may not have the time. So, my point is, get used to not being able to do things and instead revel in the fact that right now you can sit around and play nintendo to the sweet song of Dr. Phil!

they call me Grace said...