On Thursday, after my OB appointment, I'm innocently sitting in Starbucks eating my bran muffin and milk when the guy next to me decides to strike up conversation. "Do you like the zucchini walnut muffin?" he wants to know. I've never had it. "Did you read this latest article about the mortgage crisis?" he wants to know. No, sorry. "Do you listen to things other than music in your CD player?" Sorry, what? "Did you know that mangosteen is really good for you?" Did I just walk into a conversation with Jonathan Lipnicki?
(Ray: D'you know that the human head weighs 8 pounds?

Jerry Maguire: Did you know that Troy Aikman, in only six years, has passed for 16,303 yards?

Ray: D'you know that bees and dogs can smell fear?

Jerry Maguire: Did you know that the career record for hits is 4,256 by Pete Rose who is NOT in the Hall of Fame?

Ray: D'you know that my next door neighbor has three rabbits?

Jerry Maguire: I... I can't compete with that!)

He gave me a CD. To listen to on my CD player. About Mangosteen. Which is apparently one of those superfruits like blueberries and pomegranate. I have not listened to it.

Also on Thursday, walking innocently out of a store after an errand, I pulled a groin muscle. If it's not one thing it's another, I swear. I hobbled to the car, thinking it was just cramping up, like it often does. But no. I got home and couldn't walk the rest of the night. Pregnancy can be ridiculous. I stayed off it Friday and have taken it easy all weekend. It seems to be fine now. I'll head back to the gym tomorrow for a test drive. A nice side-effect has been that my back hasn't done better in months. Sitting on my arse seems to agree with it.

Part of "taking it easy" this weekend has also included the Husband and I finally celebrating our fourth anniversary, which actually occurred a month ago. We went out to dinner Friday night: Chinese. Inexpensive, but a favorite. We went to brunch Saturday morning and spent the day together. We were supposed to go to a fancy dinner Saturday night to top it all off, but at the last minute I didn't feel up to it and we ordered in pizza instead. The Husband was just as happy to see that change of plans because he's been sick as a dog all weekend. So we bought this beautiful little mini-cake for the "fancy" part of our celebration instead. It's as good as it looks, by which I mean delicious. 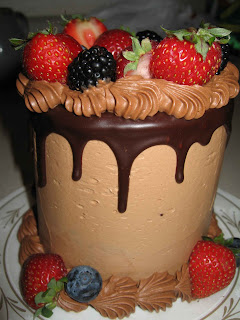 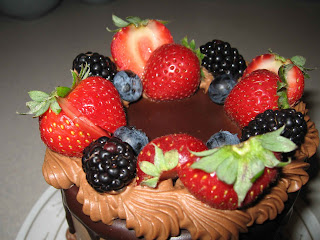 The other big event involved a first experience with acupuncture for both of us. I tend to be a big fan of your classic massage. Relaxing, calming, peaceful, all-around feel-good experience. But the Husband has an innate tendency to be "different" and doesn't really like massage, but says he's always wanted to try acupuncture. Because my OB had recommended acupuncture when the pre-natal massage I had didn't seem to do any good, it seemed like a good idea for both of us for part of our anniversary weekend.

The Husband went first, and remember that he was sick. My appointment was directly after his, so I didn't get a chance to talk to him, but the acupuncturist said he slept through the whole thing. So we talked about what problems I was having and I got on the table. He felt my wrists and asked, as though he already knew the answer, "You're having a boy, right?" Uh, no. I hope. Or I have a lot of pink stuff that's sure to come up in therapy when he's 30. "They tell me it's a girl..." "Really? Because I'm getting a really strong 'boy.'" Huh. I would ignore this except that the husband and I have been making comments to each other with increasing frequency as the due date approaches along the lines of, "That ultrasound turned out to be really early. I sure hope she was right about the sex." "Ha, ha, yeah, that would suck if it turned out to be a boy and we have all this pink stuff." "Yeah. And we haven't even tried to think of a boy name. But she said she was 95% sure." "Yeah. You still think it's a girl, right?" "Yeah...it's gotta be." Several variations of that conversation have been popular around here lately. So his certainty that it was a boy kind of sent up some mild alarms in my head. I'll be asking my OB at the next appointment if she'd be willing to send me for another ultrasound. It would be cool to see, wouldn't cost me anything, and would give me peace of mind. So we'll see.

Anyway, back to the acupuncture. So, he stuck a bunch of needles in my hands and wrists and knees and feet and ankles. It took about 2-5 minutes, I swear, that's all. I felt this massive amount of heat travel from my head down my body and with it came the most intense nausea I've had since I had the flu in June. I tried to ignore it at first, hoping it was my imagination or at least temporary. "Crap, I'm going to puke in his office," I thought. "That'll be embarrassing." So I told him, "I'm feeling a little nauseated and clammy." Because at this point I was drenched in a cold sweat. With the nausea. I felt awful. He explained that this was probably because he had inserted the needles at places that encouraged "things" to move around the torso area. So he removed two of the needles that were doing that. Within a couple more minutes the nausea and clamminess improved (although I was still drenched in my own sweat) and things were okay for maybe 10 minutes. Then came wave two. "Uh, I'm starting to feel nauseated again..." He looked shocked. He put two more needles in my ankles and said I should feel some immediate relief. I didn't. But after a few minutes I did. That wave had been worse than the first and his reaction made it clear he had no idea why my body was reacting this way. I was so close to asking him to stop the whole thing. It was bizarre. I made it through maybe 10 more minutes and could feel a third wave rearing its head when he decided it was time to take the needles out anyway. Thank God. My hour-long session was only 45 minutes.

He told me afterwards that my face had totally drained of all color with each wave of nausea, which has been a screamingly obvious sign of nausea on me since I was a child. Afterwards, the Husband kept remarking on how awful I looked for a good hour, even after I felt fine again. The acupuncturist felt sure that the reaction was due to some kind of "blood deficiency" which he decided was probably a lack of animal proteins. This is very plausible as I really don't like to eat meat (not a vegetarian, just don't like it) and am always struggling to make sure I eat enough protein. He also told me to eat more easily digestible leafy greens, like cooked spinach and kale.

It was interesting. It was awful, but interesting. The speed at which the nausea came on (and the intense sweating) and dissipated was remarkable. I don't know if I gained any positive effects from it, but it sure as hell did something. The Husband, on the other hand, looked significantly better after his session, but whether that was due to the acupuncture, the nap, or the Sudafed kicking in, we can't be sure. The Husband thinks I should give it another chance when not pregnant, but dude, that hell will take some convincing to purposely relive.

Today was spent conducting massive amounts of research into cloth diapering. I think I finally understand the details now and have definitely decided to give it a whirl. Once I got the logistics down, it actually sounds no more difficult than disposables. And sooooo much cheaper. So, I've ordered some supplies and will be sure to let you know of the success when the time comes. If it doesn't work out, I'll either try a diaper service or some eco-friendly disposables. Or try one of those for the first few months and revisit the cloth diapering when things are more under control and some of the initial baby-shock has worn off. We'll see...

So no sewing progress since the last post. I'll try again this week. Lots of ideas in the brain, as always, but the execution is lacking.
at 11:02 PM

Oh that cake looks like such a yummy preggo cake! And that acupuncture sounds absolutely dreadful! Remind me never to try that. And no worries, if by some crazy chance you end up having a boy, we have plenty of clothes for you! B knows somebody that had that happen to them, but what are the chances you would know two people that would happen to? I think you're safe.