Next We May Tackle Around the Corner

The last three days have been blessedly improved regarding pregnancy pains. My personal theory is that maybe the baby moved and isn't putting so much pressure on my pelvis anymore. Or maybe all that rest finally is paying off? I don't know, but it's put me in a much better mood, and I've been able to get around the house more easily, so am getting more done.

Last night we brought Chewy to play with his friend, Josie, while we had dinner with a friend. They're so cute together. Our friend even filled up Josie's kiddy pool so the two could "swim," which really means "jump in an out, splashing each other as much as possible, then go try to jump on the humans and watch them scream and run away." It was a good time for all. 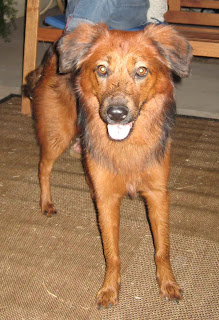 This is a work-in-progress: the hooded bath towels. Horrible lighting. I'll try to remember to take another when they're done, and in sunlight. I didn't really use a pattern; these go together so easily. But there is a very detailed pattern here, which I used to get an idea of how big the hood should be. 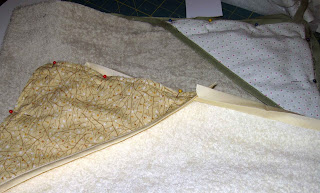 These are a couple of pictures for the nursery. The frames were from the shower Scarlet Lily threw me in Ithaca. The Husband spraypainted them to coordinate with the nursery and I made some matting changes and voila! The first is a pointilism I did in high school. 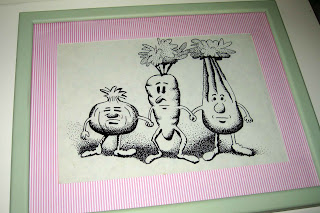 The second is a Kathleen Lolley print. 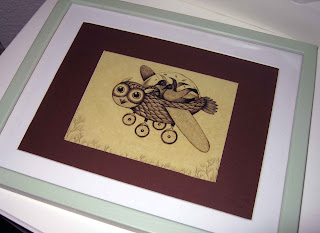 The Husband and I had the second childbirthing class on Saturday. My poor, poor ADHD Husband. It was so painful for him. The lecturer tended to go over things a little, uh, overly thoroughly, then immediately follow them up with videos repeating the exact same information she'd just covered. It was a wee redundant. But it's over and we did get a lot of good information out of it.

Saturday evening my coworkers through me a baby shower (yes, that's three and counting, but they've all been around a dozen people, give or take. Some of the Mexican families here have showers with over 50 people, so this seems more reasonable to me.). It was lovely and fun and so good to see all those women. And we got some great loot, of course.

I've managed to accompany the Husband and Chewy as far as the mailbox (about half a block away) for the last three nights in a row and intend to keep it up (so ambitious, I know!), so we're off for that "hike" now.

Email ThisBlogThis!Share to TwitterShare to FacebookShare to Pinterest
Labels: all creatures great and small, crafty like a fox, Papoosekin

Glad to hear you're feeling better! You are so friggin' industrious. Those pictures look great. I love the veggies!

Oh my gosh, I totally remember that picture!!! It was your pride and joy... and for good reason, it's great.

It's so funny to me to think of you working up all of your daily energy to spend it on a 2 block walk :) :) Hehehe...

Oh I love your pictures. If only I had one single artistic bone in my body...So glad to hear that you are feeling better!