You know those days when you're not what you would call "depressed," but your just kind of down and blue? Apparently, too much bed rest can do that to you pretty quickly. Or to me anyway. So haven't been able to bring myself to blog this past week. I've just felt so blah and grumpy and like I had nothing to blog about. Today I decided to start forcing myself out of it by doing a little sewing, a little baking, a little bloggind. I'm not feeling 100% better in this respect, but definitely improved.
After re-hurting my groin or pelvic muscles a week ago, I've been really trying to take it pretty easy, but without much improvement there. On the bright side, all this sitting around has improved the back pain, but pretty much every step is painful with the other affected muscles. I don't know what's going on. I doubt anything, but the Husband wants me to call the OB tomorrow just in case, so I will.
In the meantime, I got a few bibs done in the last week. 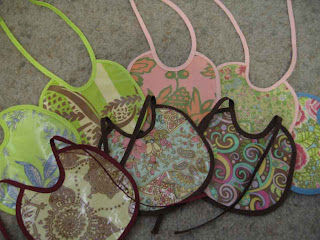 They actually went together pretty quickly, but I didn't want to post them until I had them all done and the aforementioned blues were keeping me from wanting to set foot in my sewing room. They're a very slightly altered version of this pattern. I'm also in the process of making a couple bigger ones that wrap all the way around the neck and snap, instead of these little guys with the ties.

Ginger-carrot muffins made in an attempt to squash a brownie craving (the craving is officially not squashed, but it is put off at least): 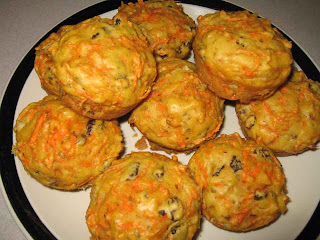 They're pretty good; although, I wish the ginger flavor was a lot stronger. But the carrots and raisins (which I substituted as my grocery store didn't hace currants), are a classic combo.

And the promised picture of the baby clothes from that one yard sale I mentioned from last week. 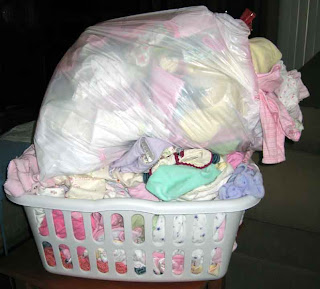 Don't be too hard on yourself - those pregnancy hormones are crazy things.

And you weren't kidding about the baby clothes were you!

I LOVE those bibs! Perfect for catching those first bits of drool. Seriously, wrap them in some earth friendly, cute ribbon, and sell them 3 for $15 or something. People would buy them. I would if I had a girl doll.

In the far, far, far, distant future when I have LL, will you make me some of those bibs? You, ouiser, scarletlilly inspire me to be more creative, Martha-esque, but highly doubt I'll get there....they are sooooo cute!