This morning came with a very sudden and welcome turnaround from the direction it had been taking toward The-Most-Stressed-I-Had-Been-Since-Grad-School, a cold and dark
wasteland from which I just barely escaped once, never mind a second go around. I finished one copy editing job last night, only to open another one and find thick stacks of about 250 pages of papers, many single-spaced, due in about ten days. This figured out to approximately an obscene number of pages that I must complete each day to reach the deadline (and I was just recently late with a deadline, something that's happened only a handful of times in the three years I've been doing this). The problem is that I copy edit articles for academic journals, and most of those journals are quarterlies, which means I get dumptrucked on quarterly. And I have not been my hyperorganized, on-top-of-everything self lately. There's a huge stack of bills and filing, I'm missing birthdays, the house is a disaster, my sewing room is still nowhere near complete, too many errands for my comfort are pending, etc. It's hard for your garden variety type A to deal with.

Then two things happened: First, I learned I would not have to go in to work today at all. Ah, the magic of working PRN! "Snow days" come more frequently here in the desert than they ever did when I was growing up in the 'burgh, north of the Adirondacks, if you can imagine such a concept. Of course the reality of a snow day is a little different in that there is now no actual involvement of said snow, but there is still the unexpected thrill of waking up expecting to face another day, put another "x" on the calendar, only to get the phone call from heaven that, in fact, I have the day off! And there's the downside of not getting paid. On the other hand, this meant I could spend the whole day copy editing, for which I do get paid, and thus carve a nice chunk out of the work I had expected to be tethered to all weekend.

Second, I checked my email and found more puppy pictures! 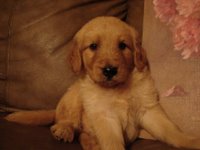 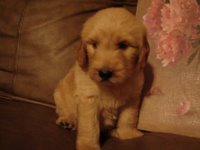 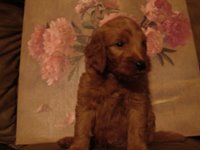 The breeder will be doing temperament testing this weekend and allocate the puppies to their families on Monday. The two girls are apparently already reserved, so now we also know that we'll be getting a boy. She sent a dozen pictures of only nine puppies, so obviously some are dupes, but Lord help me, I can't tell them apart. Some look more reddish than others, but that could also just be the lighting. They're all just darn cute (as all juvenile animals are meant to be) piles of fluff. She also asked for preferences regarding ship date, and I learned that he could come home as early as the ninth, but I don't have a set date yet. Time to make a list of the 10,000 things that need to be done before he gets here and get cracking. Or get DH cracking while my butt is glued to the couch with my hand glued to my red copy editing pen. 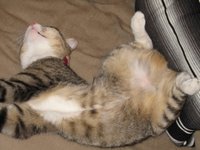 Glad you've had the chance to plow through some of those pages! Sounds like a real whatsit of a job.
I've tried e-mailing you again, will you let me know if you don't get it? Have a productive weekend.

I can't wait for you to get one of the puppies. They are absolutely adorable!

That makes me feel so much better: I have gained weight in terms of muscle in my legs and I CAN'T FIT INTO ANY OF MY PANTS. I almost cried. Oh, wait, I did, broke down sobbing in bed because I thought I was fat. I may also be eating too much. Solution? Toning, working inside my "fat burning" zone more than cardio, and doing Pilates. Wait, this could be a great post.

Anyway, glad that you survived the copyediting nonsense!