Work is going well this week. It continues to improve every week as I like to think I get more competent and, therefore, confident. I have learned, though, that, contrary to my previous assumptions, I am not the worst person at dealing with stress. Let's leave it at that.

We've now taken about 8 carloads of stuff up to the new house. And my Matrix holds quite a bit of said stuff. DH is now referring to it as the "clown car." We've been preparing items to pack each night, getting up early to load the cars each morning, then dropping off the goods at the new abode after work each evening. Every morning, when packing my car, we get to the end of what we'd prepared and find the thing maybe half full. Then we run around the apartment grabbing whatever we can to shove in there and get to work. 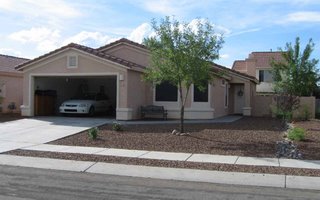 Anyway, here's a pic of the new 'hood. If you look very closely, you can even see my wreath, already transported and hung on the front door. You may also notice, at the very right of the picture (try clicking on it to make it bigger), behind the tree, the gate with spaces between its iron bars big enough for several Pucks and maybe one Lita to get through. Okay, maybe you can't see it in this picture. But, at any rate, don't worry, we'll be covering that with something or other. I'm not making it that easy for him to go gallivanting around the neighborhood. And Lita won't be going out at all unsupervised. I really don't think she'll mind much. She kind of likes having the place to herself now when the other two are out. In the plus column, we are at a nice median distance from both the major road and the wash, minimizing danger to my furbabies both by car and coyote/hawk/owl/generic cat-killer.

By the way, we've had some meteorological excitement 'round these parts lately. It's monsoon season and we had some nice flooding Monday. The Rillito River flooded in a dramatic manner. I tried to take a picture Tuesday, but it was already mostly dried up. Here's one pic from our local NBC affiliate. 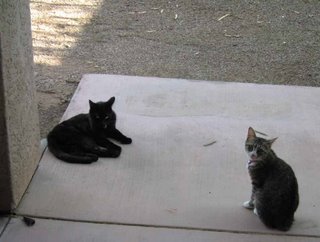