No News Is Boring News

This is a token post, a space-filler. Not much quality here today, I'm afraid. DH tore the computer apart today, unexpectedly, so I don't have access to Photoshop, which I usually use to try and pretty up my pics (as much as possible). But I've had these on the camera for days now, so I got him to show me how to upload them to my laptop. We're still unpacking. I'm still disorganized. I'm still getting slammed with copy editing, so I've had no time for anything. I honestly don't even feel inspired to write today. Could it be the three straight hours of Project Runway that's been on tv in the background rotting my brain? I swear I'm actually making progress toward having interesting things to post again, but I'm not there yet. In the meantime, here are a few tastes of what's going on around here.

Not sure what happened with this glass. I had set it down on the floor, then dropped this silver goblet-y thing on it accidentally. It broke right at the level of the liquid, which we found fascinating. We couldn't decide whether to peg it on the cohesive or adhesive properties of the liquid. Any takers on that one? 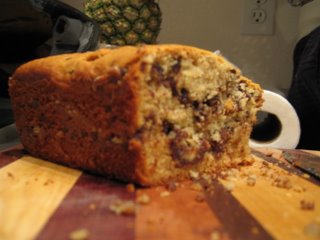 This is a chocolate chip banana bread I made today because I had some way overripe bananas. It was a new recipe I pulled off Epicurious. Not overly impressed. It's a little dry, but I didn't actually measure out the banana volume, so maybe I didn't have quite enough. Small matter; it's just going to work for the colleagues anyway. It was kind of nice to bake something for the first time in a loooooonnnnngg time. I generally have no restraint with all things baked, so they seldom make appearances in our house. 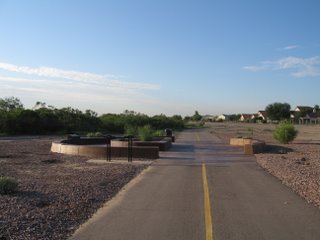 Here are a couple of promised pictures from the walking/cycling path near our house. The views are nothing phenomenal, I know, but I'm just so happy to have someplace I can walk, alone, even at night, and feel 100% safe. 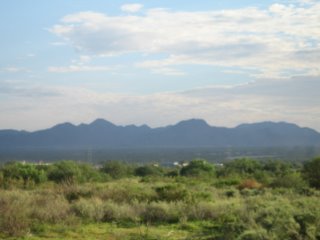 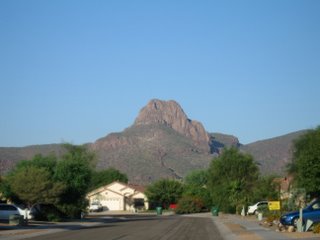 This last pic is a mountain near our house of which I'm just particularly fond.