Party of the Year

For us, at least, this was the party of the year. I suppose Christmas this year, which will be a party of 13 here, may be bigger, but this was the biggest party we'd hosted since this time LAST year, which really paled in comparison by scale. This was a TON of work and a TON of fun and I really enjoyed putting it all together and then seeing the fruits of my labor.

We held the party at a local dance studio...not the studio at which she takes her ballet classes...this is the much more affordable alternative that we WOULD have chosen, if their 2-year-old class schedule had meshed with our schedule at all. As it is, she's apparently at one of the most prestigious dance schools in Nashville, which is, you know, CRUCIAL at three years old!!!

So, it was an hour of dance and tumbling led by an instructor, followed by an hour of food and cake and running around screaming in typical three-year-old anarchist fashion. It was great. 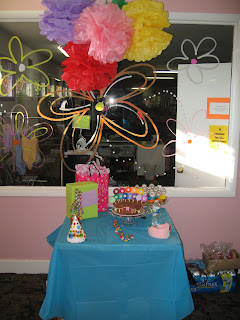 So, the flowers on the window are just part of the studio decor, though it kind of played in nicely to our rainbow theme. I had originally planned to do something like Tomkat Studio did with the rainbow tissue pom poms, but when it didn't work IMMEDIATELY, I just didn't have the patience to mess with it and was quite happy with the rainbow chandelier, as Ouiser dubbed it. 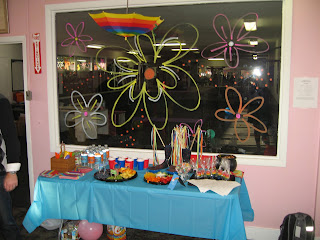 So, the Husband hung the rainbow umbrella a LITTLE higher over the table than I meant him to, but that's okay. I know at least one person other than me noticed it. 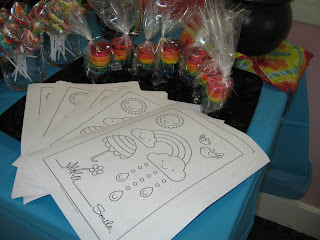 Here's the thing with the crayons. It started out as a perfect favor idea because we had all these leftover broken crayons and, hey! Great way to use them up! And free favors! Then there were suddenly 20 kids coming to this party and we didn't have anywhere NEAR that many crayons. So we busted our bottoms making enough of these things, a process which involved all three of us peeling the labels off BRAND NEW CRAYONS and breaking the into bits to melt, which kind of defeated the whole utilitarian purpose of the thing, but whatever.

I remember doing this with my mom when I was little, but I think we spread lots of colors onto a cookie sheet and melted them into a big flat block, then cut them up. I loved that. The inspiration for the way we did it was found at Preschooll Doll's Etsy shop, though really you can do this any number of ways and online tutorials abound. Also, the coloring sheet was downloaded from Style Me Gorgeous. 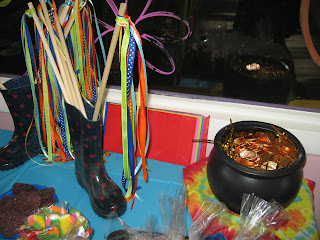 The ribbon wands were a dangerous idea...arming three-year-olds with sticks...but the dance instructor worked them into her routine and the kids certainly loved them. That idea, as well as the pot of gold coins and the umbrella, came from Hip Hooray. I would have LOVED to have copied that table skirt idea as well, but DANG. The time and the money both would have exceeded my budget by a TON. 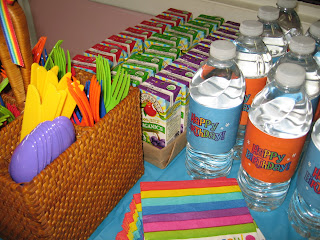 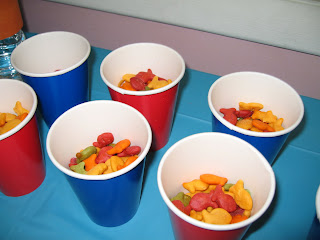 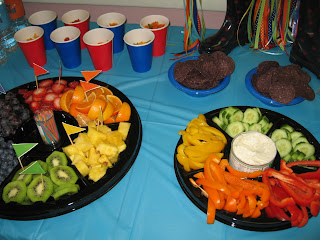 It's really a shame that there are no blue or purple veggies. The best I could come up with was the blue corn chips. 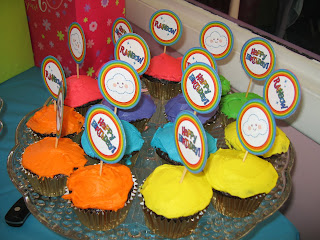 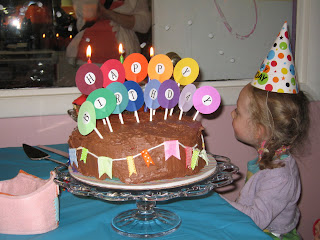 Cake decor ideas also brutally stolen from Hip Hooray, and were so much fun to make! I LOVE paper punches! But THIS was the piece de resistance... 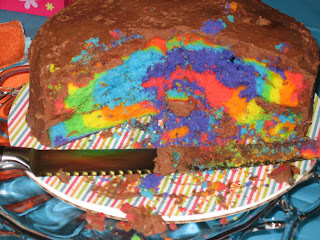 Now, this cake was super light, fluffy, and moist, and completely fell apart as I cut it. Also, the chocolate buttercream was pretty solid by this time and didn't cut well either. So, you lose some of the effect because of all the crumbling in this picture. But focus your attention to the edges, which crumbles less, especially the bottom left corner where you can see the perfectly delineated rainbow color combinations...THAT'S what the whole thing really looked like. It was AWESOME and TOTALLY got the dramatic response I was hoping for from the crowd!

For the record, there are tutorials for this cake EVERYWHERE online. Just do a quick search if you're interested. It's time-consuming, but super easy and REALLY fun! Even the Husband thought it was cool when he watched me make it. I don't know what happened with the whole rainbow-theme explosion, but when I started planning this party last summer, it actually wasn't incredibly easy to find inspiration...it took a fair bit of Google searching. But in the last month or two?!? Holy rainbows EVERYWHERE, Batman! And I can understand why...it's an incredibly easy and fun theme to work with. I had so many more ideas that I ran out of time and money to implement; I quite literally could NOT shut my brain off from generating more and more ideas. Which was great.

I should have more pics of the actual birthday girl later this week, but for now, I HAVE GOT to clean up the rainbow explosion all over my kitchen and dining room!
at 9:28 AM

Email ThisBlogThis!Share to TwitterShare to FacebookShare to Pinterest
Labels: Liliputian

It all looks awesome!! Glad it was such a success. Did you make the crayons out of mini muffin tins or full sized ones?

Thank you! Mini-muffin tin. Which we've declared officially sacrificed to the cause. I'm not sure what we did wrong there. There may be some way to get the crayon off, but, frankly, we've run out of energy, time, or interest in finding it.

Just wanted to say that we had a blast at Lily's party. Thanks for inviting us and Addie is still playing around with her wands. Hope to see you all soon.

I realize that this is totally not the point of the post, but where were you able to find paper punches that cut circles that big? I wasn't able to find any here last summer when I looked.

Everything looks amazing! (And like a LOT of work!!)

It WAS a lot of work, and that was just a 2" punch from Michaels. You may also want to try that circle cutter from Martha Stewart. Ouiser has one...I haven't asked her about it since she bought it, so I'm not sure how it's worked out for her...I'd be interested in a review...but the concept is definitely cool!

What a fantastic party! You are the best!