Our first Christmas as a threesome has come and gone. Could have been better...I was sick as a dog...again. Twice in one week--no fair! And I think this is the third Christmas I've been ill for out of the last five or so. I don't know what it is. I don't feel like I get particularly stressed around the holidays. I love Christmas. Just a germy time of year, I guess. This has definitely motivated me to get a flu shot though. It's not too late, is it? Last year I was able to get one for free because I worked at the hospital. That was the first time I ever had one. Where do normal people go? Your PCP? 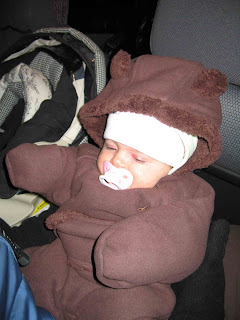 So we missed out on our holiday dinner plans with our friends. It's fun to go to their house because their dog, Sadie, plays with Chewy; and their two kids were excited to spend some time with the Papoose. But we did get to spend a little time with them on the 23rd when we all went to Winterhaven to see the lights festival. This is a neighborhood in Tucson that puts on the most fantastic Christmas lights display you've ever seen. It's free to enter, though you can pay to take a hay ride or trolley ride if you don't want to walk. All the houses participate and the results are over the top in the best possible way. I took some pictures, but they didn't turn out well, as pictures of holiday lights rarely do. I don't even think a verbal description would do it justice, but I'll try: one house had a fountain set to music (think Bellagio); one featured a giant open mailbox with a ski slope diarama inside; one was western-themed complete with a cowboy lassoing the moon; one did an original take on the 12 Days of Christmas (Maids-a-Milking were represented by breastfeeding mamas, French Hens were wearing berets and sipping red wine); far too many to list... It was impressive. The residents must just plan to stay in every night for the 10 days leading up to Christmas. There is just no driving up and down those streets what with the throngs of people on foot, horses, and trolleys. 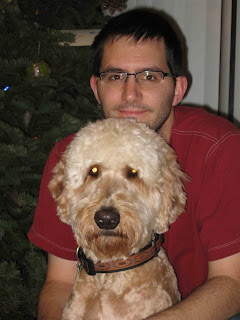 Chewy accompanied us, sporting his new haircut. He had to get shaved, despite the winter temps. When the Papoose was born and we were in the hospital, Chewy spent a few days at the kennel. He came back with mats in his fur that only got worse over the next two months as we didn't have the time, energy, or knowledge with which to deal with them. Finally, on advice from the Husband's cousin, who's a dog trainer, we learned that mats are actually painful for dogs and we immediately made him an appointment for grooming. So he had a doggie spa day for Christmas this year. He's been much more energetic since returning (just what we needed!), but he also seems a little cold...not wanting to lay on the linoleum anymore, looking for anything he can make a bed out of. So I think I'm going to get him a doggie coat (a nice sporty one, nothing frou-frou), put a blanket outside, and maybe look into some kind of dog house. 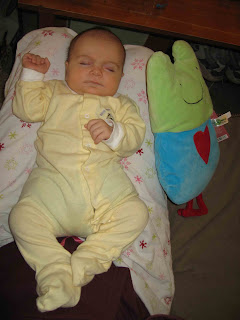 This is the Papoose with her new BFF, Fredericka, a gift from her Aunt R. Maybe some of you have heard of this, but apparently there's a company that has taken children's drawings of monsters and made them into real toys. A portion of the proceeds go to charity, and your monster comes with the child's own description. For instance, Fredericka is a girl who apparently likes caramel ice cream, roast beast, and "bisketti." She also loves to dance. So cute. 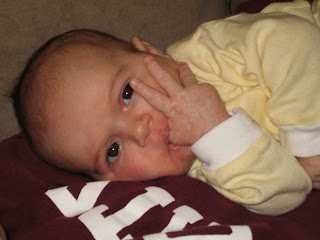 Happy holidays, everyone! I, for one, will be focusing on health this new year.

Hi Sara. Happy Holidays. I was sorry to read that you were sick on Christmas. At least you got to sit at home and enjoy the day with your family.
My mom and Pam gifted us a digital camera for Christmas, so I Checked out your blog and Lori's and became inspired. Thank-you.
I hope you feel better soon, Chia

I'm pretty sure you can go to Walgreens or any other pharmacy and get a flu shot for about $20. I see that advertised around here. See you soon!

sorry to hear you were so sick, hope your on the mend. OK how did she get so big !! I love the finger in the mouth. chewy you look great :)