Two attempts in the kitchen this weekend and I'm batting .500.

Of course I only thought to take pictures of the cookies, which didn't turn out so well, and forgot with the dinner, which was great! 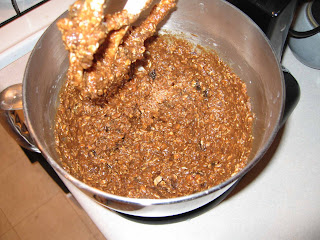 Cookies first. Whole wheat oatmeal chocolate chip raisin cookies. With nuts. Trying for more of the almost-an-energy-bar thing, rather than the to-die-for cookie thing. But I was still disappointed. I'm thinking that the hazelnuts I included were either the wrong choice of nut, or that I toasted them too much. I also think I need to try them with more chocolate chips and more raisins. I'll get back to you if I give it a second shot. I also clearly need to space them out on the cookie sheet some more. Oops! 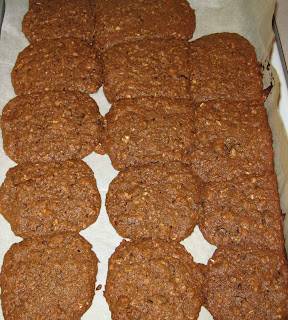 The dinner I made was another Cooking Light experiment. From the April 2007 issue, Thai Beef Tacos with Lime-Cilantro Sauce

Because the carrots were included in the slaw I purchased, I just left them out and didn't think to compensate for the 2 cups less of veggies. Which explains why I was thinking their recommendation for 1/2 cup of slaw per taco wasn't going to add up to eight tacos. So next time, if I have the same packaged slaw, I'll just do 5 cups instead of 3. It was still good. Even the husband liked it. And only 431 calories for two tacos, per Cookine Light.

I really like the idea of your cookies even if they didn't taste the way you wanted. Did you invent the recipe?? Let me know if you make some you like and I'll try it.

Bryan and I made Chicken Marsala for the first time this weekend b/c his family was here and it was SO yummy!! Very underrated dish in my mind. I'm now a fan. (Two posts in one week!! I'm a fan of that too :) )