The advantage to being late in getting your gifts out to people is that by missing the rush, you just might find that your recipients finally have enough time on their hands to give your gift the attention and blogspace that it deserves.

Two of my dearest Tucson friends (although, one is technically now living in San Fran) sent the Papoose these birthday and Christmas presents that arrived yesterday: 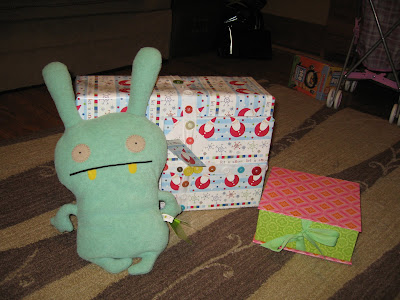 There are very few stuffed animals that the Papoose actually pays attention to so far. One was given to her by these same friends at her birth. Another was given to her by her Nummi and Nona (a blue-footed booby). And this one, an UglyDoll named Moxy.

Inside that cute pink and green box? A hat so awesome I want one for myself! 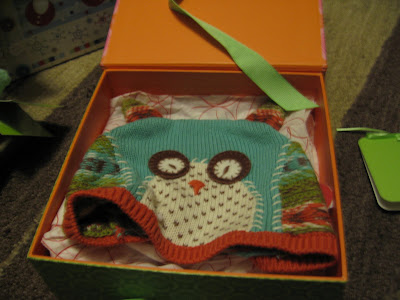 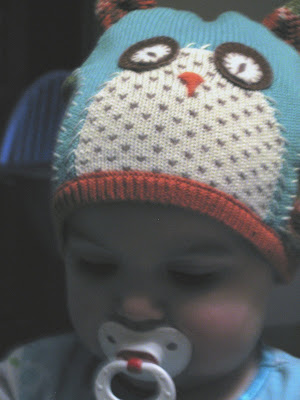 There was also a Rody, for which she's still a little small, but in which she's very interested; and Little Pea, which has been on our wishlist for a while. Little Pea is not yet in the Papoose's favor as we are currently in a phase where only five or so books are tolerated, and these at least a dozen times a day are not so much tolerated as demanded. I often want to shoot myself. If I have to read or watch the DVD of Goodnight, Gorilla one more time, I think I will probably die.

The Papoose received many other awesome gifts this Christmas, so I hope no generous givers out there feel slighted. The holidays were kind of a barage of wrapping paper and cardboard boxes and fun. But it was impossible to keep up. I'm still writing thank you notes. Many more thank you notes. We are more grateful than my meager attempts at expressing it will ever show. 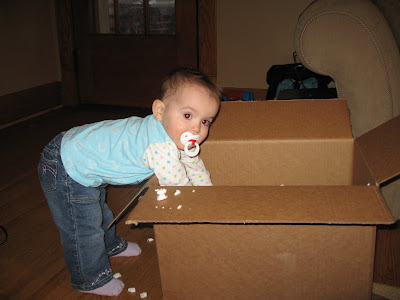 Of course, the box is still the best toy of all. 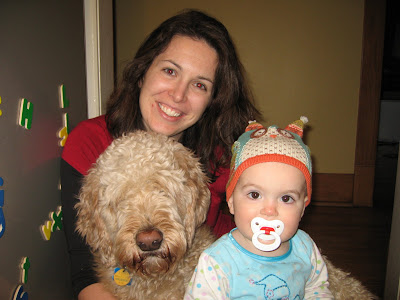 Girl, the only thing that could make that picture of the 3 of you cuter is if you were all throwing up rainbows. For serious. I want a baby with an adorable hat and a dog whose eyes are half-covered in fur right this instant. Wait, no. But kind of yes. ;-) ~J

Ugh... you have to stop posting pictures of yourself with your beyond-adorable child, it's killing me with sadness! Why again don't we live near each other yet??? I just want to squeeze you both!

okay, the picture of the three of you is the cutest ever. EVER. with that much cuteness, i don't even mind you grocery shopping at my house:)