Goats and Sheep and Chickens, Oh My!

We're back from CA, safe and sound. We arrived on Wednesday. The plane was about an hour and a half late, but compared to my last misadventure, it was a dream flight. We stayed at my mother-in-law's farm, north of Sacramento, that she runs with her partner through Friday. My nephew, J, had been there all week and was an old farmhand (as old as you can be at not quite 18 months) by the time we got there. We met the pygmy goats and one regular goat, Mr. and Mrs. Baa (sheep, if you can't guess), and lots of chickens. It was about as ungodly hot there as it was in Tucson, unfortunately. 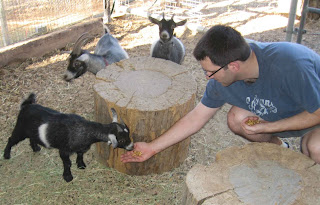 The husband feeding the pygmies, who are very shy. 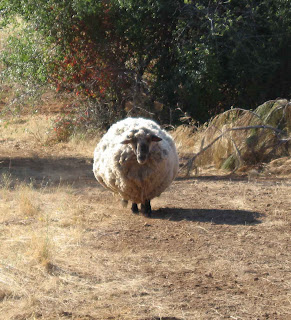 Mr. and Mrs. Baa were rescued from previous owners who didn't have them sheared for three years, and it shows. Their new owners are currently desperately searching for someone to shear these poor creatures. They must be literally at least half wool. 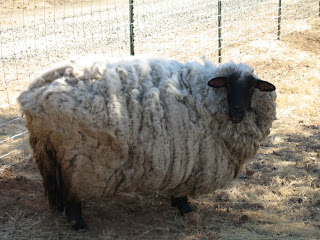 Friday we headed to the cabin in Tahoe (the north side, sans fire), where we had a birthday party for the husband's uncle that evening. The next morning they through a baby shower for me--my first! It was lots of fun and included... 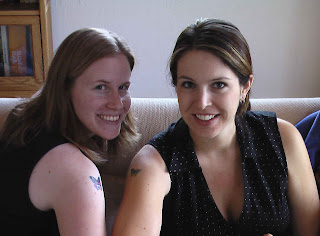 butterfly tattoos (even the boys were good sports and allowed themselves to be branded)... 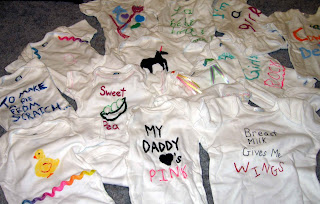 and onesie decorating. The men joined in on this, too, which was great.

We brought home lots of fabulous gifts. We left Tahoe that evening to drive back to the farm, and flew out early Sunday morning. Too brief, as always, but it was great fun to see everyone and I was so touched that so many of the husband's family drove and flew in for the occasion. And Tahoe was beautiful, also predictably. It was the first time the husband and I had been there in the summer, though. The weather was perfect. I didn't manage to get any pics, but I know the husband's brother did, so I'll see if I can get some to share.

The flight home was also mercifully reasonable. Some nausea with the landing in Tucson (lots of turbulence), but it could have been worse. Keep your fingers crossed for my trip back East again in August.

I didn't work today, but kept plenty busy around the house. Also test-drove some Chai brownies from the March 2007 Cooking Light issue that I had planned to make for a pot-luck with people from work this Friday. Good thing I did because they did not turn out well. Very dry, so I won't share the recipe. I substituted whole wheat white flour for the all-purpose flour, which may have been the problem. Not sure. So now I'll have to come up with something else for Friday. Considering Ouiser's lemon cake.

Yeah, so glad you're back! Can't wait to see more pictures and maybe even hubby's video he said he was going to take.

The onsies look great! You must have had a lot of talented people at your shower. I guess that rules out the idea that you and I had about the onsies! Someone having 40 homemade onsies seems a little excessive :)

I have been on your blog a lot since you posted the pictures of Mr. and Mrs. Baaa. I love to look at them and get really mad at Mommy when she takes me away from the computer. It was also lots of fun to fly into your belly and kiss it. You're so pretty.