Neither Snow, nor Rain, nor Heat, nor Gloom of Dark Magic...

Harry Potter should have arrived on my doorstep Saturday, according to an email I got from Amazon several weeks ago. I made big plans to drop everything the minute he arrived and head for a coffee shop to read all day. I even went to the gym early, started the laundry early, was as productive as possible, knowing that any minute the package would be delivered and the rest of the day would be lost to the world of magic.

When it got to be 8:30 at night and it still hadn't come, I gave up. My UPS tracking number said it was out for delivery, but obviously it wasn't coming. The next day, when UPS said it was delivered, the Husband got on the phone with Amazon who told him that UPS had delivered all their packages to the USPS. We grabbed the Pooch and headed to the mailbox.

The mailboxes in our neighborhood are clustered in big blocks of boxes that require keys to open them from the resident's (sidewalk) side, while the mail deliverer inserts them into the boxes from his (street) side. There is apparently a slight mismatch between what fits on the carrier's side vs the opening we see when we open our mailbox doors to pick up the mail. Or else he used an expanding charm to make it fit. 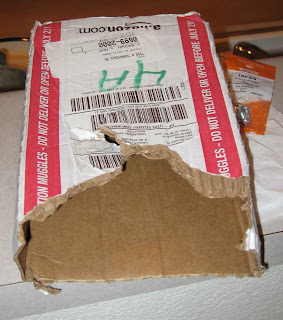 We literally tore the box off the book while it was still in the mailbox in order to squeeze the book out. I was so frustrated when the book wouldn't come out. It was Sunday! Everyone else was well into their HPs, if not finished already! I was living in fear of overhearing a spoiler. The Husband, doubting Thomas that he is, said it was "against the laws of physics," that there was no way it was coming out of the mailbox. I think the magic of hope made it somehow shrink it's dimensions just enough to slip out once we had enough cardboard out of the way to turn it diagonally. And then it was mine.

I just finished tonight and felt so drained. I didn't want to talk to the Husband or anybody. I just wanted to sit and process and mourn the end. I was quite pleased with the whole thing, but it was just so intense. It has exhausted me. I was pleased to have been right about some of the theories that were important to me. And to have been right in some ways that I did not expect, but were better than I had guessed. I'll read it again in the near future, I think, now that the tension has abated some. I think I'd enjoy it more the second time, knowing in advance how it all turns out.

It was good, actually, that I had the book to while away the hours the last few days as the Pooch has been much under the weather. Sunday morning he was just not himself. He lazed around all day, more than expected. Then we realized he wasn't eating or drinking. Wouldn't even take treats or ice cubes. Seemed to have struggle or pain with urinating. We worried. We went to bed. The next morning was the same, so he went to the vet Monday. The Husband took him because he's too big for me to lift into the car while pregnant.

They mentioned Valley Fever, they mentioned urinary tract infections, they said he had a fever and had lost weight. They gave us antibiotics and said to feed him broth. We did. He threw both up. He went back to the vet. They took x-rays. No obstruction, but they saw he was a bit backed up. They gave us laxatives. So he's been on a steady diet of broth, with increasing proportions of dry food, along with the meds since then. No action from the back end yet, though he seems to be peeing just fine now. They drew blood. Results should be back tomorrow. But he's looking much more himself, so I think he'll be fine, whatever it is.

In the meantime, while waiting for Harry, I made a couple of soft books from panels my mom picked up at a yard sale. 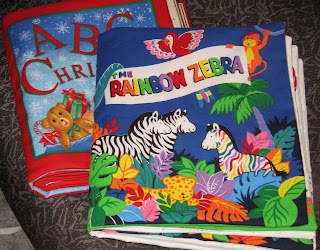 And we've been enjoying dropping temps with the arrival of monsoon season. 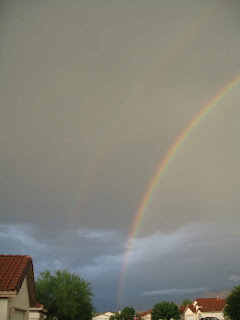 Though some of us don't seem to have noticed one way or the other. 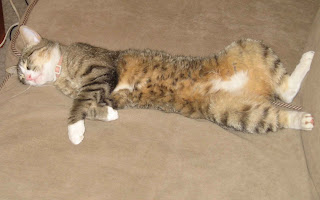 Poor pooch. And I'm halfway through HP (not sure how I've managed time away to blog actually!)

I loved HP. I felt exactly the same way about the book and got so stressed out at one point I was cursing JK Rowling's name. I feel so bad about your book anxiety. I wouldn't have been able to wait. I started reading it as soon as I got home from the midnight bookstore extravaganza. Poor little poochy. Send Chewy love from Momma Cat and McKenzie.

You made those books?!?? Seriously, your sewing skills get crazier by the day! It wouldn't even occur to me to make books (even if I knew how to sew). How very cool!

Love the shot of Bob too :) Looks like something Miles would do.