I made the lemon cake Thursday night. Unfortunately, like Ouiser, I also neglected to take pictures of it. Mostly because I didn't put the glaze on until just before we left for the party last night, and we were in such a rush that it slipped my mind. But it was delicious, got lots of compliments, and it was kind of fun to make. I think because I had my new Microplane zester, with which I promptly grated some finger into the lemon within the first 30 seconds of use. Aside from that, zesting was much more enjoyable than ever; so efficient! One bit of warning with that recipe: it says six to eight large lemons. I used three. Did you find that, too, Ouiser?

Anyway, it was great. Which is an impressive review given that I was making it around the hours of 1:30 to 4:00 am. I couldn't help it. I came home from a nine-hour day at work (that didn't used to be a big deal, but apparently now I'm pregnant enough that it is), and was just so exhausted, I knew it was a bad idea, but I fell asleep at six-something. I woke up at 7:00 and made myself get up, tried to stay up until a decent bedtime hour, but nothing doing. Fell asleep again at 8:00, slept until the husband got home from class at 11:30. Then it was all over. I was up. So the baking occurred in the wee hours. Then I slept again from 4:00 to 6:00. Not ideal, but I survived, and I'll even say the cake was worth it. Wish I had a picture. It was pretty. Even the husband complemented the look of it and he never notices those things, nor does he, as a rule, even like lemon cake. 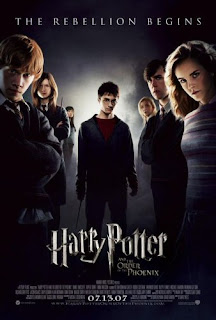 Tonight we saw Harry Potter and the Order of the Phoenix. I'll give no spoilers here, but I will say the following:

I don't have any real criticisms. The husband hates any movies made from books. But he also hates live music (I know, I know. And he's really quite smart about most other things, I swear.), so he clearly just has a real hang-up about anything altered from it's original version. I could stand for Julie Walters to be a little less shrill, but she does look just as I picture Mrs. Weasley. I will give away (because it's not really giving away anything) that they did not manage to include St. Mungo's, which is a shame as it would have been a really great piece of filmmaking. But you can't include everything, and I understand the limitations.

And I've got dibs on reading the book first (within this household anyway) when it comes next weekend! Very excited...

We just saw HP today. So many great things from the movie. It's made me even more curious about the "Friend or Foe" question. Loved the girl who played Luna. We'll have to chat about the final book while in Ithaca. My Burlington friends and I have the "stand in line at midnight" tradition. We're counting down the days!

So jealous. I think we're going to try to get a babysitter this weekend so we can finally go see HP. In lieu of being able to go to the theater, I reread books 5 and 6 this weekend during S's naps and after her bedtime. Now I'm dying for book 7 to come out...though I fear that there will be an empty place in my life knowing that the story is over.

Glad you liked the lemon cake, and yes, I used fewer lemons than she suggests. I think I just zest more vigorously. She can afford to buy more lemons than I can.

I will make my own blog piece on HP the movie, as I just saw it myself. What was the line? WHAT? Call me and tell me!!!!!!