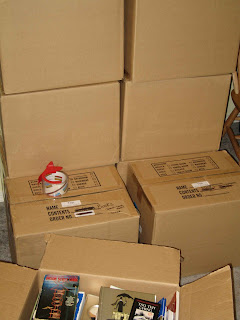 This is what I did on Sunday. The to-be-nursery has more recently been the guest bedroom. It currently has two large, hulking bookcases in it, which seemed like at least one too many for a baby's needs. Especially once we get the crib and glider in there. So I packed up all my old Greek and Latin texts, all my speech-language pathology stuff, most of the husband's computer books, and more. This freed up one whole bookcase, which will eventually be broken down and garaged, and half of the other, so there's plenty of room for baby books.

I didn't feel like I was pushing it too much physically, but there's a good chance I was wrong. For the last couple of weeks I've been having increasing back pain. Not lower, which I would have expected, but upper right. Obviously due to the increasingly imbalanced weight, the loosening of the abdominal muscles, shifting upwards of the ribs. Getting through eight-hour days at work has been rough. I've been in pretty significant pain by the time I'm heading home (and "significant" for me, with this kind of pain, is noteworthy as I have a fairly high pain tolerance for this stuff). Can't take ibuprofen when you're pregnant and Tylenol does nothing for me. Anyway, Sunday night the pain was so bad it woke me up in the middle of the night and kept me up for hours. I'm not sure what that's indicative of exactly, but my years of interactions with orthopedists has taught me that it definitely falls under the classification of "not good." So Monday morning, instead of waiting for the pain to gradually build throughout the day, I got start off with it right from the get go! Yay.

But I heated and iced like crazy last night, with the husband's gracious assistance, and today was much better. Hubby also hooked me up with a prenatal massage tonight, which I'm hoping will also help. I've laid off the gym the last couple days. Doing some physical therapy exercises that my mother-in-law, a very experienced PT though unfortunately out-of-state, and a PT at work, also very experienced though unfortunately mostly in geriatric acute care, assigned me. I think it's only a muscular problem. I don't think there's anything skeletal going on, but I can't be sure as I do have a history of herniated and bulging discs. But that was several years ago. The massage therapist tonight said my scoliosis could be partly to blame. She was able to feel extra tightness on my right intercostals (muscles between your ribs that help you breathe) and left IT band (running from your hip to your knee), which support my mother-in-law's theory that it may have something to do with my ribs. That would also explain the day that it hurt to breathe. Not fun at all.

But it was better today, so we may just have to stick with this heat/ice/occasional massage regimen. I'd like to eke out at least one more month of work, if possible. Anyway, enough anatomy/injury talk. 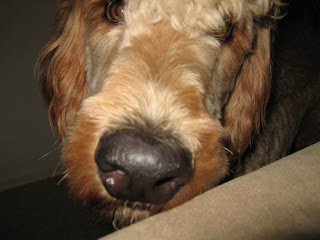 Chewy is one year old! Can hardly believe it. We need to have a little doggie party for him. Or at least a doggie cake. Or an extra bone. Something.

This also alerted me that my one-year blog-day passed me right by without acknowledgement. Oh well. Can't keep up with every milestone.

Email ThisBlogThis!Share to TwitterShare to FacebookShare to Pinterest
Labels: all creatures great and small, Papoosekin

Not commenting on the back stuff since you and I already talked about it on the phone... but I want to request a bigger picture of Chewy! The only mental pictures I have of him are as a puppy and after the crazy haircut. I hope when the baby comes you're better at posting pictures of her :)

is that a copy of Mary Poppins in the open box??

Chewy is already a year? You're right, I can't believe it. Good luck with the back stuff--I'm sure you have all sorts of gizmos, but I personally love the heating pads that are either filled with corn, buckwheat, or lavender. The aromatherapy aspect truly helps me.