We're back from our trip to Buffalo last weekend, where we were blessed with warm weather. The husband and I still froze at night, but that's due to the Tucson-thinned blood, not to any shortcomings by the Buffalo weather gods. We visited Niagara Falls, caught up with old and very dear friends, saw die Frau married off, ate some wedding cake, did some dancing, and the husband even got to eat some wings from the restaurant that claims to have invented them. The wedding was beautiful. Die Frau looked gorgeous. It was all that a wedding should be. I expect die Frau will post some of her own pics soon, but here are a few of ours (find more from Ouiser). 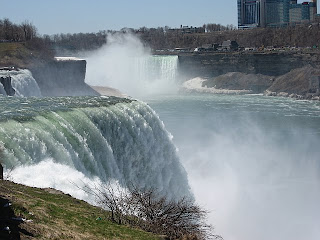 This pic is stolen from a friend 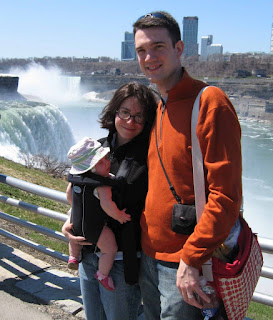 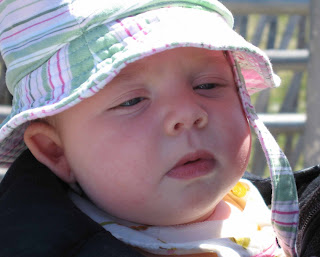 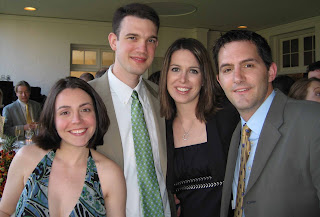 Ouiser, hubby, yours truly, and my husband

In other news...big news...news that I've been dying to blog about for weeks and weeks...news that explains why I've been such an absentee blogger for the past couple of months...well, the pictures will speak for themselves: 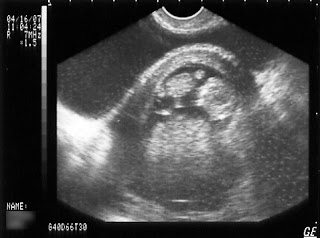 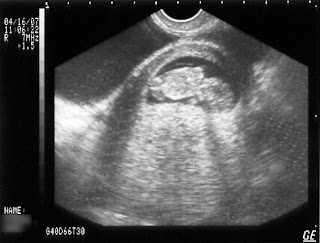 I will be 14 weeks pregnant this Thursday. The pics were taken at 12 weeks. For those not well-versed in the art of reading these things, the baby has his/her head off to the right, kind of tilted to his/her left. The other big, round part is the torso, and those four little blobs around the torso are the arms and legs. He/she was waving them everywhere during the ultrasound. And no, you can't tell the sex yet. What you see is the umbilical cord.

I feel lucky to have gotten an ultrasound so early. It wasn't planned, but the doctor wasn't satisfied with the read she was getting off the heartbeat doohickey; she could only get it for a second at a time. So I got to have these pics to take home. You can even see the four heart chambers in the second pic, if you know what you're looking for. Unfortunately, the husband couldn't be there, but hopefully he'll catch the next baby show, I think at 18 weeks. And yes, we'll be finding out the sex then, if all goes well.

The nausea's 99% gone now. But it was a doozy. I kept everything down, but "morning" sickness is a big, fat lie. Progesterone poisoning, as it was called in one of the books I looked at, is much more apt. It lasted all day, every day. And that little baby would only be appeased by my eating the crappiest crap I could get my paws on: white bread, potatoes, bagels, scones, cookies. Ugh. Makes me a little ill just thinking about it. Who eats white bread?!? The husband, that's who. I couldn't look at a vegetable. Thank goodness I'm back on track now.

I'm starting to show a wee bit, but only to those who know me. Not obviously pregnant yet. And I'm starting to have some clothing struggles, but am nowhere even near being ready for maternity clothes, so not quite sure what to do there.

At any rate, it's an adventure so look for this to transition yet again from a craft blog to a puppy blog to a baby blog.

Woo Hoo!! So glad to see you're: A) Back in the land of blogs and B) Able to talk about the baby!

You should post the picture of the man who's NOT your husband obsessively listening to your belly :) Hehehe

And just for the record, I'm *still* not used to this whole "best friend since you were 13 who you used to play 'Psychologist' with is having a real live baby!" thing. Good thing we have another six months to go...

I too could only stomach early pregnancy by eating every snack food I could get my hands on - but hey, whatever gets you through! Glad you're over the worst of it.

Hehehe...I'm so happy to see the ultrasound picture. Isn't it so fun to look at? I stared at S's pictures all the time.

Speaking of S's pictures...does she look drugged in that picture of her by herself? I swear she wasn't, but she looks it.