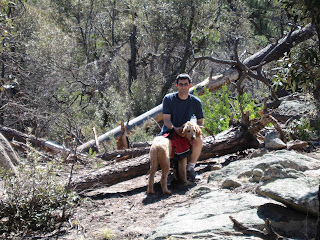 Yesterday was the husband's actual 30th birthday and we had a pretty low key celebration. Chewy had his first hike. We hit a trail on Mt. Lemmon and the pup-pup broke in his doggy backpack. He carried two bottles of water and his travel bowl. 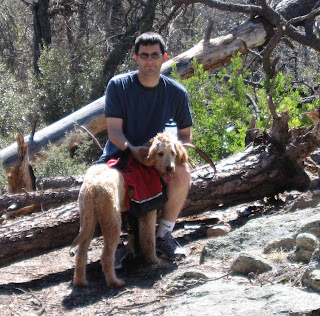 He did great; didn't seem to mind the pack at all. He was well-mannered on his leash. We hiked for an hour and 40 minutes and got back just as he was starting to look pretty pooped. I think that dog found muscles he didn't know he had. He acted a bit nervous about jumping up and down the terrain at first, but I think those working dog genes kicked in and he seemed to realize he could do more than he thought he could. 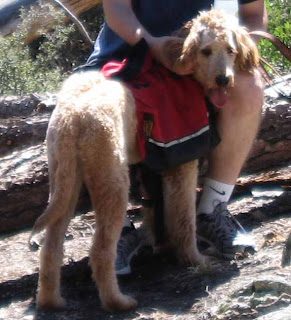 He was a bit jumpy though. Twice something must have poked him somewhere, surprising him, and I swear all four feet were in the air as he did an aerial 360 and landed about 8 feet away. The husband and I had each seen him do this once or twice on walks before, but it's always hilarious. He looks like he's made of springs.

Later that night we went to the roller derby. Our second time ever. One of our dear friends is in the try-out process and was working the penalty box. I don't see myself becoming a rabid roller derby fan, but there is something unmistakably fun about the costumes, the themes, the fights. It's the kind of thing I could have seen myself doing in my early 20s had I been exposed to it. And had I been able to skate. And had functioning knees.

So you could approach death that much faster? Really? Lung cancer seems better than a few idle moments? 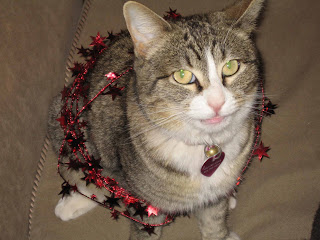 On a brighter side, gratuitous picture of Bob, "helping" with the cleanup of birthday decorations. She got into that outfit all on her own, my friends.
at 9:40 PM