Today is DH's and my 3rd wedding anniversary. Three years ago, DH's Big Brother and family gave us some gift certificates through Select Registry, a company that allows you to use certificates at hundreds of B&Bs, inns, resorts, etc. around the country. We finally cashed ours in last weekend, to celebrate our anniversary, at the Tanque Verde Ranch, here in Tucson. 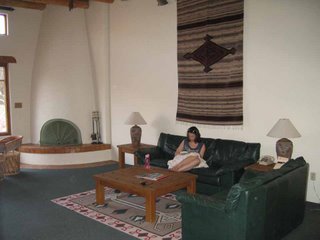 We had a great time. DH said he was worried that taking a mini-vacation without leaving town would be kind of anti-climatic, but he admitted he was wrong. I told them it was our anniversary when we made the reservations, but we only paid for the cheapest room available (student loans, you know). The guy on the phone said they'd put us in the best room available upon check-in. I was a little hopeful, given that July in Tucson is not exactly peak season. But I was not expecting the best room in the place, which is what we got. It was a six-person suite, bigger than our whole apartment, that goes for more than three times what we paid. So we were big fans right off the bat.

Breakfast and lunch were buffets with a huge dessert selection at lunch (we're also big fans of food). All meals were included with fruit and pastries available to snack on between meals (even we didn't need that). Alcohol was the only thing not included, but that was okay. It wasn't that kind of weekend.

All activities were also included, horseback riding being the big draw, naturally, at a ranch. There was also mountain biking, hiking, a nature center, tennis, swimming, art lessons, workout room, etc. We pretty much just did the horse riding, with a little swimming thrown in.

Now, when I was little, maybe eight, nine, ten (my mom would know), I used to go to horse camp for a week in the summers. One year my horse took off, full tilt, with me on it. I was terrified and immediately and completely forgot everything I knew about controlling a horse. I got more and more scared as the distance grew on the train between me and my group. Finally, one of the counselors was able to catch up with us and tried to shout at me what to do. I was pretty much frozen. Eventually she was able to grab the reins from her seat on her horse and stop mine for me.

I harbored a moderately intense fear of horses after that. Well, not the horses themselves, but riding them. Sometime in adolescence I rode a very gentle (but tall) horse of a dear family friend, just around her backyard, with her leading it by the reins from the ground. So, not riding so much as passively sitting on the horse. It was all I could do not to scream. I think I hid it very well though. I'm pretty sure my mother was there and probably had no idea I was scared.

So, when we went on our honeymoon to Jamaica three years ago, we were at an all-inclusive resort that offered horseback riding as an excursion. DH loves horseback riding (When we first moved to Tucson, he tried to talk me into buying one of the many properties here with stables. I nipped that in the bud.), so, of course, he was dying to go. He's much more adventurous and adrenaline-seeking than me (Much more is an understatement. We are at opposite ends of the adrenaline spectrum.), but I didn't want to deprive him, he had no one else to go with, so I decided to take a baby step toward conquering my fear. It was a good choice. These horses were so slow it was hard to keep them moving. I didn't even have to steer; they knew the path like the top of their hooves. It was a success. 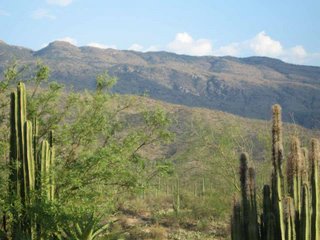 So I was okay with trying the horse thing again last weekend. We got up early one morning for a nice, easy walk ride. Exact same experience as in Jamaica, only much hotter. And I learned better control of my horse, mostly able to keep it from eating foliage when it was supposed to be walking. Then we signed up for an intermediate lesson. Also a success. I managed to trot my horse without fear, though with a sore rear end. Then we learned loping, which is one step down from a full run, and I even did that. It was fun! Much smoother than the trot. I was able to get him (Boomerang was his name) up to a lope one out of two tries. 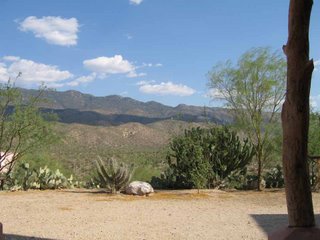 Here's where things went downhill. DH and some of the other guys in the class were becoming quite proficient with the loping and decided to take the "lope test" later that day. Basically, you get three chances around the ring to prove that you can lope safely. This allows you to go on the more advanced trail rides. At first I thought I wasn't ready to try that yet, I shouldn't push it, just leave things on a good, positive note and be proud of all the progress I'd made in conquering my fears. But DH thought I looked so confident and proficient (and the instructor had used the word "excellent" with me) and I started to confuse my careful, in-control, Type A nature with DH's adrenaline-loving, fly-by-the-seat-of-your-pants, reckless nature and was fool enough to think I could do it, too. 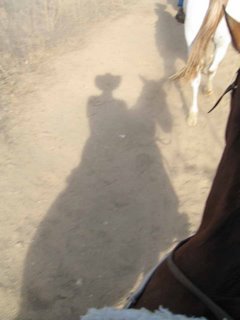 I failed. Miserably. Well, maybe that's an exaggeration. I stayed on the horse. He didn't take off on me. It was more like he couldn't understand me. And the instructor was yelling at me (not mean, but I don't do well under that kind of pressure) and I was trying really hard to do all the things I learned and not panic, but I was so frustrated and confused and embarrassed about why it wasn't working. And I pretty much fell apart. Well, not visibly until I got off the horse. I knew enough to keep it under control so the horse wouldn't get freaked out.

So I did not get to end on a high note. I may have emotionally regressed to the easy walk rides again. But even if I never get the nerve to lope a horse again in my life, at least I did it once. And we loved the resort as a whole. I would definitely go there again. It's worth the money (even without the gift certificates). I would even try a different ranch resort someday. Just give me the easy horses who are more interested in eating the foliage. 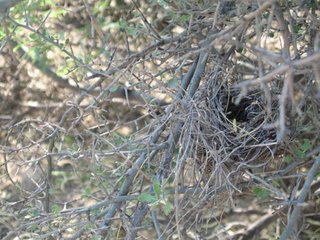 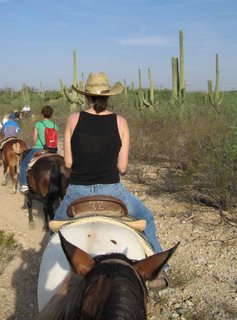 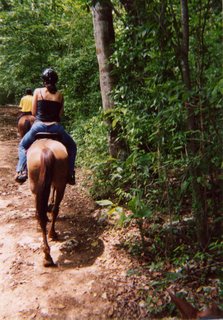 Tucson 2006; Jamaica 2003. Speaking of foliage, that seems to be about the only thing that has changed here! I'm pretty sure those are even the same pair of jeans...
at 6:03 PM

Email ThisBlogThis!Share to TwitterShare to FacebookShare to Pinterest
Labels: vacation

What a great anniversary mini-break. Sometimes I think it's fun to holiday close to home - no time wasted travelling!

Sorry to hear about the horse traumas. I'm slightly nervous of them - it's those huge horsey teeth. Strangely, I'm less worried when I'm sitting ON one - safely away from those horsey lips - eek.

I can't do horses at ALL--too allergic to hay to get anywhere near them! Although somehow I did take horse riding lessons at one time before the allergy developed, I guess. It didn't take.

So glad you had a nice time--the place looked wonderful! Hooray for a nice anniversary and a good marriage!