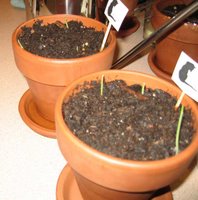 The oat grass has sprouted! The challenge I hadn't yet tackled was how to move the pots into an area with decent sunlight without leaving them susceptible to curious paws and noses. My less-than-ideal solution was to put them in the bedroom windowsill with the door shut by day, back to the kitchen counter (where the kitties don't dare set paw) by night. I'm not sure how well this works when the catnip sprouts; it may be too odiferous for them to resist, but we'll cross that bridge when we come to it (when did I start using the royal "we"?).

Worked four days this week. It's getting much better now that they've given me a modicum of independence and now that I've reaccepted the student role and stopped fighting it. I also got yet another copy editing job, so I feel like I'm raking in the dough for someone working part-time. Ooh, and I got a surprise couple of days off for this long weekend; I thought I was going to have to work through the holiday.

Sewing machine update: I called Friday afternoon to get the status report and they claim (and I have no reason not to believe them) that the company sent the wrong part! Wah! They had already reordered it, but it could be as long as another two weeks. I'm trying not to think about it and satisfy myself with scrapbooking. I've gotten another four pages done, but it's a poor substitute for the pleasing whir of my machine. Sigh. The wee wonderfuls pattern continues to taunt me from the coffee table (I should put it in a drawer before it taunts me a second time). Meanwhile, other recipients have torn through the kitty and are well on their way to having a bear-rabbit-kitty army.
at 1:19 AM