I was supposed to go see a potential house today after work at about 6:00. I got done at 3:00. Instead of driving the half hour home to turn around and come back, I decided to kill time. I went to buy a fourth pair of scrubs, now that I'm working four days per week. I drove around to familiarize myself with the northwest side of town, now that we may be living there. I explored the Foothills Mall, to which I'd, for some reason, not yet been. Probably because it's one of those outlet malls without any exciting stores; just your standard Levi's, Big Dogs, etc.

But there was a Linens n' Things there, too. I've been looking everywhere for a set of sheets with pink in them with no success (no success with any I like anyway). I want to make a quilt for our bed (after a couple more practice smaller ones) and am dreaming of pinks & browns, but that means convincing DH that pink on the bed won't bother him. So we agreed on a trial set of pink sheets. Today I actually found two sets that I liked, as well as a brown set (clearance, no less!), so I snatched them all up and paid for them before the pink sheet gnomes could come and spirit them out of my arms.

And as I was checking out, I had a little incident. My skills as an SLP got me mistaken for a bilinguist. Some woman, obviously Spanish-speaking, at the cashier next to mine kept asking for "roz." And the cashier kept saying, "Rose? Rose? I don't know what you're talking about." And I asked, helpfully, I thought, "Ross?" (as in Ross Dress for Less, akin to TJ Maxx and probably many others, varying regionally). At which both salesladies and many customers looked at me and smiled as though I were the cleverest person in the store. Unfortunately, the Spanish-speaking woman thought I was clever enough to speak Spanish, which I'm not (yet), but should be, and started saying a lot of Spanish words really fast and everyone was looking at me expectantly... And all I could utter was a meek "No hablo Espanol." And only the English-speakers seemed to grasp that concept. She kept right on spewing rapid-fire Spanish at me. So then I'm wildly flinging my arms around in the air trying to communicate in gesture how she could get to Ross because I'm, in fact, not clever enough to tell her in Spanish. Nothing makes me feel stupider, living in Tucson, than my inability to speak Spanish. That was going to be one of my goals for the summer, but I'm too fully aware of the mass of the undertaking, and other things seemed more fun, in the end. Ultimately, I'll have to do it. Maybe when I'm not so new at the speech path thing and my brain isn't so exhausted every day I'll have more mental energy to devote to that.

Anyway, back to the shopping. I met with more success at the Levi's outlet. A pair of jeans that fit! In a dark rinse! Jeans, or pants of any kind, never fit me, so this was a huge breakthrough.

Then I discovered the Carter's outlet. Good Lord, I think I spend every day fighting off temptation after temptation to buy my nephew more clothes and books. I go through stores picking stuff up, making a little pile, carefully calculating costs, months-old, and sizes in my head, only to finally come to my senses, abandon the pile somewhere for the poor saleslady to find, and skidaddle before the baby-gift-buying demon overtakes me again.

By the time I left the outlet mall to head over to this house for rent, I realized I'd left my phone in the car. Doing so is a sure guarantee that I will have missed at least 17 calls in under 3 minutes. Not quite, this time, but I did miss 5. All from DH, who was frantically trying to warn me that this lady had cancelled. Apparently, her dog died 4 days ago and she's "too distraught to do anything." Normally, I'd be nothing but sympathetic, but DH called her at 4:30 to confirm and that's when she told him she wouldn't be there. Hello? Were you ever going to call us? Or were you just going to let us drive the half hour from where we work to be stood up? So I'm 90% annoyed and only 10% sympathetic.

It was probably an omen. The place was really far away. We live central and ~30 minutes from where we work in the NW. This woman was another 30 minutes west of there. The draw was that there was an acre of fenced in backyard. An acre! What dog needs a park when his backyard is an acre?! But there was also the little problem of the six feral cats she was feeding twice a day. That would have become an issue. So she's off our list. DH will go see two places tomorrow and we'll see a third on Saturday together. Wish us luck.

I know there's at least one Republican reading this blog, so this is fair warning that you may want to scroll past this paragraph, Republican. :) But I feel the need to mention what I see as a poor, poor decision made by my hometown state of New York today regarding gay marriage. I can't say I was as surprised as the gay activists seem to be regarding the state's decision to ban gay marriage, but it's the state's reasoning I get worked up about. One of the main arguments was apparently the questionable wisdom of allowing gays to raise children. What, are we afraid that the straight kids are going to be confused into "gay-ness" by the deviant natures of their adoptive parents? Really, we think they're better off in the foster care system? Really?The moral fabric of society is unraveling as I write this. Oh, wait...it already did. And it ain't the fault of the gays. But that's a whole other gigantic tank of worms. Are we worried about the decline in reproductive rates when this whole gay thing spreads to the hearts and mind

I'm off to watch another gripping episode of "So You Think You Can Dance?" Anyone else as in love with Ivan as I am? Oh...I'm the only one over the age of 14 watching? Never mind.

Here's a current plant picture. I've been shutting the cats out of the bedroom during the day to let the plants 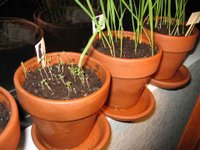 sit in the windowsill. One of us messed up this morning and accidentally shut Lita in the room. Entrapment, I know. You can see a little of the minor carnage here, in some snapped grass blades. The catnip was slightly mauled as well, though I don't think it's visible in the crime scene photos. I'm not sure if it was the smell of the catnip or the dirt that lured her in to a life of crime. This one has a strange thing for digging. Always has. Comes from being born in the mean streets of Norwich, NY. Unfit mother, absent father. You know the story.

You can't be any geek off the street. Gotta be handy with the steel, if you know what I mean. Earn your keep! 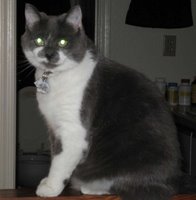 (please excuse the background-of-questionable-taste; focus on the kitty!)
at 9:22 PM

You crack me up. I've given up on wondering what leads pets to their wayward behavior. Otis also likes to eat dirt and all manner of vegetation, so I feel your pain.

Sorry about the house. You guys will find something soon.

I, too, was really upset by the whole gay marriage ban. If two people love each other, why can't they proclaim that love as a legal union? The whole thing is a morals issue to me, and it's no different than Jim Crow laws and not allowing women the vote. A black person can't help being black, a woman can't help being a woman (without major surgery), and a gay person can't help being gay. And almost none of these people would help it if they could. So why get punished for it? Why should they be denied all sorts of benefits that heterosexual couples can get, from insurance premiums to tax breaks?

On another note, how many horrible stories do we hear on the news and the crime/medical dramas about heterosexual parents being horrible to their children? How about the high rate of divorce? It seems to me (and this is purely conjecture from a hetero) that, as I said, if two people love each other, they should be able to marry. Additionally, if those two people want to have a child through some legitimate method, that should be fine too. What about the thousands of unwanted children born? I saw tons of evidence of that in the public schools alone. There's no license, no law about being able to procreate. So many kids are born who are given up, neglected, treated poorly. Why not let two loving, caring responsible adults have a child?

When DF was very young, he saw two men holding hands. When he asked his mom what they were doing, she replied, "Those men feel the same way about each other that your father and I do." That's so simple, even a five year-old got it. Why is that so hard to understand?

On a much lighter note, I know you'll find a house that's just right for you. DF and I are going through the same thing, but we're looking for a double to rent out for a few years (there are a lot here) and then get a house of our own. Good luck!