The prodigal sewing machine has returned and it comes bearing a new pattern selector gear. I picked it up Tuesday afternoon and have already pumped out two rompers for Jonah. *Spoiler alert for Jonah's 'rents: there's a pic at the end of this post.* I hope to get a couple more done this weekend. That kid is going to have a whole new wardrobe via his only auntie come Christmas. That's okay, he's a good excuse for me to practice my sewing skills. Someday, I'll make clothes for my own babies and Jonah will have a chance to say, "You know, back when I was young, your mom was throwing some thread and a needle at a pile of fabric and calling it a romper. Meanwhile, your sitting here in your designer duds and I'm stuck in this potato sack she likes to call clothing. Hmph." And my babies will say, "..." (because they're imaginary babies; they can't talk yet).

Well, the lease is signed and the deposit in, so the rental house is official. We'll have those keys on August 1 and we have our current apartment until August 15, so we have 15 days to make the transition. I'll post pics when we get in there. 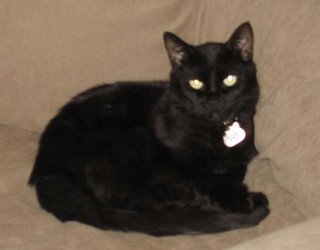 puppies still aren't born yet! Or, if they are, the breeder hasn't posted it on her website yet. Which would be understandable if she has a houseful of new puppies. I feel like such a traitor, sitting here writing about a move and a new puppy with Puck ferociously cuddling and head-butting in my lap. 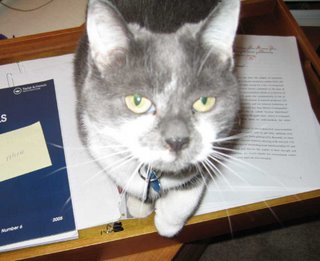 Oh, they are so going to hate us for a while. Their peace will hold out a couple more weeks, though. And I have a stack full of puppy books to get through! I'm actually really looking forward to training this puppy; I think it will be fun for both of us. The not so fun part will be training DH to train the puppy. 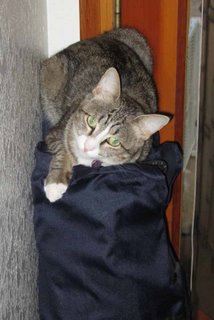 DH is not so fond of rules and structure and, although I think he knows how important these things are for a dog, I'm not sure he's completely willing yet to follow through on them. But he's so busy with work and school, I think I'll be doing 90% of the training anyway. DH 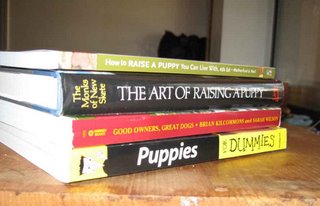 can just show up for playtime, which is the best part anyway! He did say he'd go to as many puppy-kindergarten classes as possible, so that will be a help. 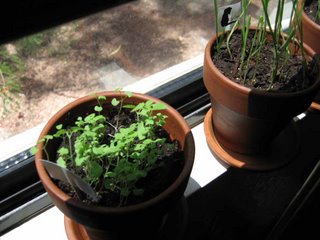 The sprouts keep growing taller, but their stalks aren't getting any thicker, so they're just kind of folding over on themselves because the stalks are getting to be too weak to support the leaves. I didn't remember catnip looking quite like this. The stuff I remember growing in my mom's garden had very thick stalks. Maybe it's just still too young at this point to look anything like it will. The cats seem to recognize it though. I thought I was safe leaving it on the kitchen counter at night because they're pretty well-trained not to jump up there. Turns out they're just well-trained not to do it while we're looking. The plants are now fairly nomadic. Never a night in the same place. My bathroom counter seems to be a haven as I think the cats decided long ago that this was a boring place, not worth visiting. Plus, it can be wet. So they steer clear. For now. One whiff of the catnip and I'm sure it'll become the happening hang-out spot. I can't wait until the plants are big enough to be planted in the ground at our new place and to withstand the affections of the kitties.

And, finally, here are the aforementioned rompers: 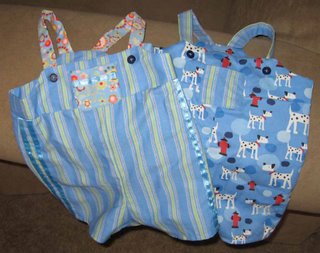 Email ThisBlogThis!Share to TwitterShare to FacebookShare to Pinterest
Labels: all creatures great and small, crafty like a fox, home and garden

Very glad your wait is over! The rompers are quite cute and, as Jonah will drool and crawl in dirt and make other messes (I have friends with kids, so I'm not knocking Jonah here), it's fine if it's not designer. Besides, homemade clothes from Auntie S will be more appreciated than anything bought at BabyGap.

Babies? Plural babies, dear? How many are you planning to have?!? ;-)