At Least We Know I'm Not Spineless

The big news around these parts is that the Papoosekin is learning to crawl. I mean it is imminent. Wednesday afternoon Ouiser kept the Papoosekin for me while I was at a physical therapy appointment (more on that later). When I came to pick her up, she was playing on the floor and was apparently so excited to see me that she got up on her hands and knees...for about a second. But it was the first time I'd ever seen her do that. 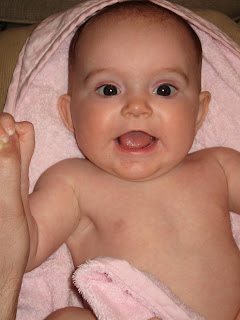 Then yesterday morning she did it again when she was on our bed and realized Bob was there, too. Last night, after the Husband came home, she did it over and over again for about 20 minutes on the living room floor. She got up on her hands and knees, would hold it for maybe 10 seconds, including some rocking back and forth, and then fall. Once she even got a knee forward, then fell on her face. I cannot even begin to describe how exciting it is to watch this. So, so, so cool. I mean, five months ago she was barely breathing oxygen and opening her eyes. Now she's about to be mobile. 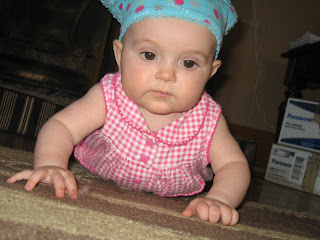 We're also a smidge terrified. I can't even think about the babyproofing we need to do. Have I mentioned she's only five and a half months old? We're not prepared for this. We just recently discovered an appalling lack of smoke detectors in this house (didn't the last owners have three kids? Yes, they did.). Obviously, that needs to be fixes asap, hopefully this weekend. Then we'll get on the babyproofing. 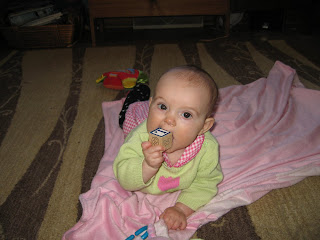 And as our child is flourishing, we are decaying. Seriously, it feels that way sometimes. The Husband came down with another round of that mystery stomach virus/plague from hell that has laid waste to his innards four times now in five months. Sound suspiciously like something other than a virus to you? Me, too. I made him go to the doctor who ran an ulcer test, but that came back negative. Now we have to decide whether to do further tests, or let it be for now.

And I started physical therapy last week. With the repeated back issues...the Lilliputian getting heavier (I've gotta stop feeding her...)...I'm only 30; I shouldn't be this broken. Anyway, I went to the doctor. He took an x-ray. It showed that I do not have scoliosis (lateral curvature of the spine), but my pelvis is crooked. And I have kyphosis (anterior-posterior curvature of the spine...why older women look hunchbacked. And by the way, that explains why my rowing coach used to always yell at me to straighten my back, and I'd say, "I am," and she'd say "No, you're not!" and I'd say, "I can't straighten it anymore!" and she'd yell, "Yes, you can!" Etc. We all hated her.). And my left leg is 2 cm longer than my right.

So they put a heel lift in my shoe and gave me a gazillion exercises to do each night. And I have to go see my PT twice a week. I like her a lot though. And there's that deductible. So let's home this is worth it.

Gotta get to bed. Mr. Ouiser was sick. The Husband was sick. Twice. Baby S was sick. Now the Liliputian and Ouiser are both sick. And I'm just starting to feel a strange sensation in my left sinus. Drat.
at 9:23 PM

S. didn't crawel first., she walked at 7 months !!!! talk about being busy. I know you will have time to baby proof everything. My suggestion when she get mobile teacher to go down the stairs on her butt, I learned that the hard way when s went down the attic stairs. It's amazing how quick they learn that going down on there butt. I just can't wait to see all of you. I glad you were able to get to PT. see you in a few days. Love M

So sorry you're still not well! I agree, send D to the doctor for more tests. Terrible that he's had stomach stuff for so long. I know Dr. R. (my stepdad) would say to get tests, if that means anything.

That stupid Amy. I knew something was off with your alignment--I'm still convinced that she exacerbated some of your back problems. Don't you feel somewhat vindicated, even while I'm sure you're frustrated about the whole pelvis/longer leg/PT business? :-)

Take some Airborne. I swear it works. All the big drugstores have their own generic. Take it three times a day until Ouiser and everyone else is on the mend. I did and managed to avoid whatever horrible plague went through a ton of students and teachers this winter. I also washed my hands obsessively and never touched the railing. I realize that's harder when it's your own house, but the Airborne may help.

And yes--for your other blog--take care of you! We love you and realize you have a lot to deal with!