What do you do when your puppy gets big enough to knock down his puppy gate? And he's not even 16 weeks old yet?

I came home last night to find the house trashed. I actually got scared at first because I realized he was out but couldn't find him in the house...I got worried he'd swallowed something dangerous and that was why he wasn't coming to me. Then I found him in our walk-in closet. I couldn't tell if he had gotten trapped in there (the door was shut, though not latched) or just fallen asleep. Anyway, he was fine, and once the damage was assessed, it turned out that his short puppy attention span had saved us. He didn't gnaw on anything long enough to cause total destruction. "Chew, chew, okay, what's next!?!?" 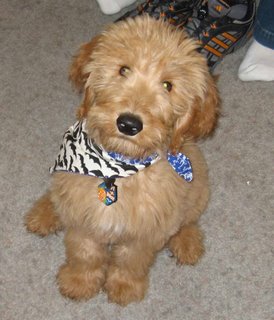 Note the reverse side of the reversible Halloween bandanna

And on the bright side, he was shockingly mellow last night. Exhausted by his reign of terror, I suppose. I actually got through a whole phone call with Sanders with the puppy on the floor next to me. I don't think that's happened since the first day we got him! We'll be looking into the occasional doggy day care splurge once he's 16 weeks and old enough to go. Just to give ourselves a break in the evening once in a while. Usually he sleeps all day while we're gone so his batteries are fully charged just as ours are petering out. 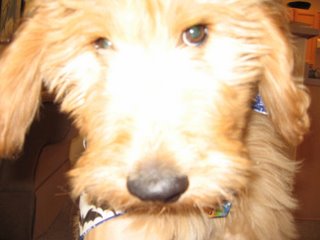 I wasn't even angry about him getting out. Really, that's our fault. But I did get a bit miffed when I realized we've hit puppy adolescence. I thought it was pretty gracious and understanding of me not to be upset about his anarchy, but he took total advantage. When I called him to his crate for dinner, he looked at me, turned around, and started drinking water from his bowl. Fine, I thought, he just wants a drink before he eats. I called him again. He looked at me, then laid down on the floor. I walked over, picked him up and set him on his four feet, stepped back, and called him again. He walked away. I could have killed him. Luckily he's still small enough to pick up so he still ended up in his crate with his dinner. He didn't eat anything. Probably had a stomach full of kitty litter and fireplace soot. His favorite snacks.

On a totally unrelated note, anyone else not have their Halloween candy or pumpkins yet? Running a little late this year...
at 8:56 AM