Celebrated Halloween last night. Was working on the costume right up until the cab showed up. I was pretty happy with it in the end. I ended up calling myself Frost. There were a group of us superheroes, one villain, and DH, who went as a "cereal killer." It was fun. 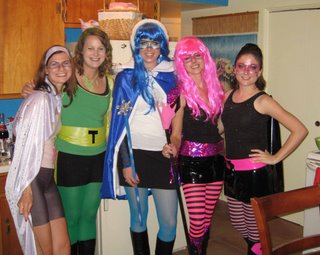 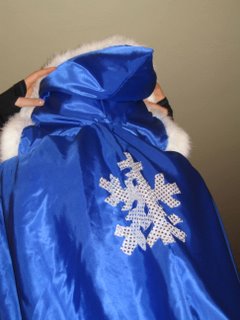 We went to a release party then were at Club Congress, a bar downtown. Earlier in the night, my friend had mentioned that Kate Walsh was in town and at Club Congress that afternoon for some kind of Planned Parenthood fundraiser. Then when we were standing in line to get in that same bar, I just saw her walk by. I've never seen a celebrity in real life before. I really don't tend to get starstruck at all, but that was new for me, so it was cool. I was the only one who spotted her though, so I just kept saying progressively louder, "That's Addison. That's Addison! That's Addison!!" until my friends heard me. Then one of them took off at a run after her (she was in the parking lot across the street at that point) and I followed. I don't think we were obnoxious at all. Just said we really enjoyed her show, nice to meet you, have a nice night. That's part of her job anyway.

It was strange. I kept thinking I expected her to be bigger. Not heavier. She was quite thin, as one would expect. But bigger. Which is a dumb thing to say because she's 5'10", same as me, pretty tall. I'm guessing on some level I just had this metaphorical concept that because she's a celebrity she should be big. Important? I don't know.

you girls look hott! yep 2 tt's... i miss the Glattke's halloween party! love the cape too by the way.

You are the Halloween CHAMP. You always have been. Your kids are going to look awesome...no store-bought cheapies for them! Way to go, Frost!