Chilled to the Bone

Ouch. Eleven days since my last post. Sorry, dear readers. That's a new low for me. Busy with the usual: work, pup, etc. 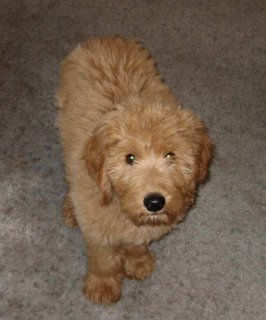 DH has been working sixty- to eighty-hour weeks, plus school, for about a month now. This past weekend was the first weekend we've had in a long time together and we spent pretty much two days straight hanging out together, which was fabulous. Friday night we, Chewy included, went to a friend's house for take-out Italian and Lucky Number Slevin, which was weird. I fell asleep at the end, but was liking it up until then. It was late, I was confused. I need to try to watch it again. DH loved it. 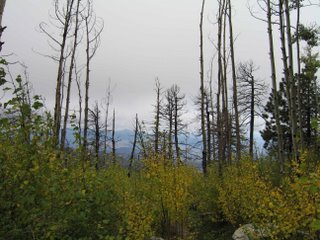 On Saturday we tried to go to Oktoberfest on Mt. Lemmon, but they wouldn't let Chewy in so we just walked around a bit. I remember why I moved out of the northeast. It was 48 degrees up there (high 80s down in Tucson)! I always know it will be cold when we go up there, and I always pack warm clothes, but I still always manage to underestimate the bracing nature of that cold once your blood has thinned out over a long Tucson summer. We about froze to death. Notice in the pics I'm rocking the skirt and jeans look. I don't do that look. I like it occasionally when I see it, but it's just not my personal thing. My plan had been to change into jeans once we got up there, but I couldn't bear to take a single article of clothing off, I was so cold. So the skirt stayed on. 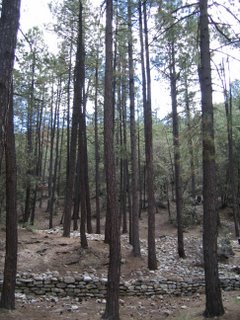 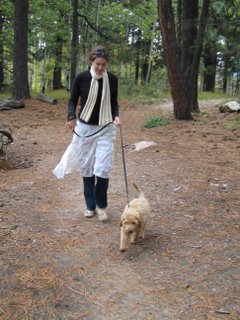 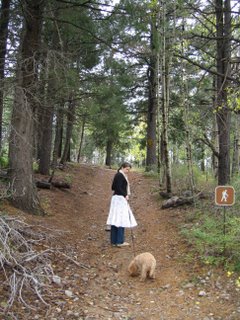 Because we could only stand the cold for about an hour and a half, we then headed back to Tucson to the Tucson Meet Yourself festival, which was fun, but stressful with a puppy. It was too crowded and dirty to easily manage Chewy there. He was underfoot, trying to eat all kinds of garbage. It was easier mostly to just carry him. He hasn't had all his shots yet so we probably shouldn't have had him there anyway, but I want him to get comfortable with that kind of chaos. 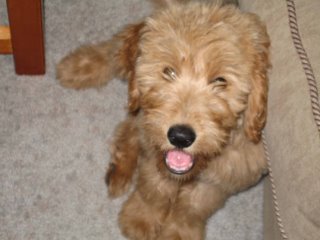 We went to the vet today for his third round of shots and it was good timing because he started limping about 20 minutes before we had to leave for the appointment. I'm still not sure what he did, but he somehow hurt a toe on his front left foot. He never made a peep, but was really favoring that paw. We felt all up and down with no reaction from him, but finally the vet located the toe in question. Then of course he needed xrays, but it wasn't broken. Nevertheless, I kept him home from puppy class tonight to rest it. We can make it up tomorrow. 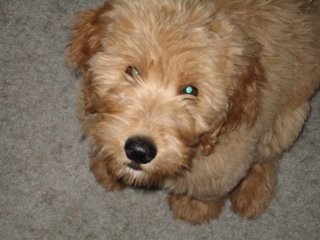 It's feeling as much like fall as it will get around here for a while. Low 80s. Everyone's in long pants and sweaters. I bought a ton of those crazy, lumpy mini-gourds they sell this time of year. I love those things, how each one is so different. I have plans to hit the pumpkin patch this weekend. I'm trying to put a costume together. Some friends want to dress as superheroes, but I don't have a name yet. I'm going with a blue color scheme, so my power should probably be something to do with ice or wind. Any ideas? 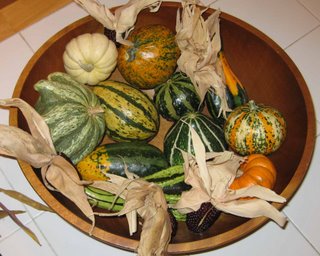 And I joined the gym that opened about half a mile from our house. Unfortunately, no classes. It's just equipment. But it's better than nothing and I've been ridiculously lazy. DH wants to start riding his new bike for exercise, but he gets home so late he'll have to go in the morning. So the current plan is that he will try to work out in the morning while I take care of Chewy and I'll go at night, while he dog-sits. This is doomed to fail as he is the night person and I the morning person (well, I can do either one, but lately I've been a morning person, and am definitely a morning person when it comes to exercise), but we have to give it a shot. Wish us luck.
at 11:04 PM

You could go as Jill Frost instead of Jack. Or the Snow Queen from Narnia? That is so weird--we JUST RENTED Lucky Number Slevin from Netflix. Hasn't come yet.

I can't believe that 50 degrees is cold, you former Plattsburghian.