After three escapes from jury duty in the past ten years, all due to my following the higher calling of pursuing an overeducated brain, today my number was finally up. I had my first jury duty experience and narrowly escaped a four-day trial, managing to get out after just four hours instead. I was called to a criminal case, something about firearms possession by someone on probation, and watched juror after juror be excused for various reasons. Pretty much, when the judge asks if the members of the jury have had any experience in their lives that in any way relate to the case (i.e., to guns), that's going to register as positive for an awful lot of Americans. It seemed like just about everybody had either been on a previous jury for a crime involving guns, or they had a brother who was also arrested for illegal possession, or their house had been shot up, or they were against guns in general, etc.

So they eventually called me in from the reserves, but I wiggled out of it immediately. One of the questions they ask you is essentially whether your absence from work is going to cause some kind of major catastrophe. I explained that if I was absent, there are other people who could be called to fill in for me, but as per diem employees they were in no way obligated to do so. Therefore, it is potentially possible that patients needing swallow evaluations would not be seen and end up either not eating until they are evaluated, which could be days, or eating when/what they shouldn't be, placing them at risk for aspiration pneumonia. This is a stretch because I know that what would really happen is that my type A coworkers would work 12-hour days if they had to in order to make sure all patients were seen. But technically they're only required to work eight-hour days, so that was no guarantee either. It was all about spin. I was careful not to tell the judge that this was what would happen, but that it might, which was true. So he let me go.

After a lot of initial resentment leading up to my fulfillment of my civic responsibility (as they reminded us over and over was what they were choosing to call this purgatory), it ended up being pretty interesting. I still maintain that they should pay for our parking and minimum wage on an hourly basis (instead you get mileage and $12/day if assigned to a trial). And I about had a heart attack talking to the judge in front of the whole courtroom. Part performance anxiety, part anxiety over trying to prevent myself from being a classic SLP and over-explaining the bit about my job, part that random impulse anxiety people get that they're going to do the worst possible thing (like people who stand looking at the view from atop some tall building obsessed with the thought that they might suddenly lose their head completely and jump--my fear was that I'd lose my head completely and purger myself).

But the judge was really nice and did a great job of explaining everything. If I were a salaried employee and not per diem, meaning my income would not be affected by the trial, I might have actually been interested in staying on the jury. I'm sure my chance will come again someday.

In other news, after our puppy class today we stuck around for the Petsmart "Howl-o-ween" party, which was nice. Chewy was exhausted by the end. Their were treats for humans and pets alike. Mostly dogs in attendance, although there were three ferrets and two cats. I don't know what kind of cats those were to tolerate a roomful of canines. They must have been sedated. Chewy was sporting the brand new reversible Halloween bandanna I made him. He was by far underdressed compared to the other pooches, but (a) I'm not into elaborate costumes on my dog, (b) he's 14 weeks old. He would have ripped any costume to shreds. I felt the bandanna was more our speed. He looked very handsome and now I have something to do with my novelty fabrics. I bought so many long ago when I first started sewing and couldn't help myself. I had that stashing impulse (hence the blog moniker). But then you realize there's really nothing you can do with farm animal fabric when you don't have kids. Hey, the dog won't care! He's relatively tolerant and an ardent supporter of agriculture. 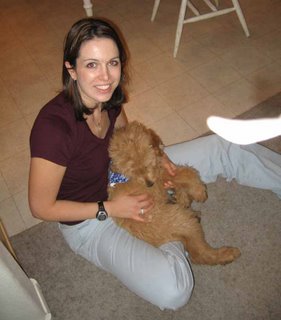 I don't usually include photos of myself here, but I wanted to show this for size reference. Can you guys tell how huge he's getting in this picture? And a lot more growing coming up! He was up to 15 lbs last week at the vet.
Anyway, there was a pet parade around the store with trick-or-treating for things like a frisbee, a bandanna, dog biscuits, etc. Then the trainers taught them all to spin. Chewy spun from a reclined position on the floor as he was wiped out by this point (we'd been there two hours, counting class time). Then they were planning to take pictures and give awards for best costumes. We weren't going to win, so poor sports that we are, we went home. 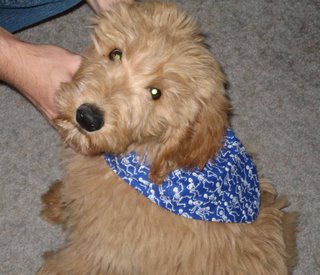 Here you can view the skeleton side of his fancy new duds. You'll have to wait until next week for the flip side. I know, the suspense.
at 11:22 PM