What is it about little kids and Santa? Aren't they supposed to love the color red? Why do the treat the jolly old guy like he's some horrifying fat leper with a beard? Maybe it's the beard itself. Or maybe it's the bizarreness of the whole situation. I mean how many times does a parent make a kid get all dressed up, get in the car, and then hand the kid over to some strange man after standing in line for an hour? Maybe they think they're about to be sold into child slavery.

Whatever it is, like S, the Papoosekin's got it, too. A couple of weeks ago, the Husband took her to see Santa while I was buried in copy editing. I got her dressed up, but didn't really mind that I was missing it. I figured it would be pretty uneventful since she would have no idea what was going on.

Boy, was I wrong. Still glad I missed it though.

I asked the Husband to write this story out before he forgot the details, but he just can't find the time, so I figured I'd better do it. So this is a second-hand account; I retain the right to confabulate and pepper inaccuracies throughout.

Santa was appearing right down the street from Ouiser, which is also right down the street from our bookstore, so it was the perfect locale. He took her there after story hour at the bookstore with S and Mr. Ouiser, where the Papoose was apparently knocking over displays like so many dominoes while the Husband tried in vain to repair the damage done and prevent further chaos, chasing her around the store at a breakneck pace. She almost did break her neck when she finally plowed into one display headfirst, like a human bowling ball.

At Santa's place, they stood in line for about 30 minutes, which was challenging, but the Husband managed just fine. When they finally got in to see Santa, the Papoose found herself in his lap and immediately lost it. The Husband shushed and hugged and held and comforted and they tried a couple more times, but to no effect. So the photographer suggested they put the Papoose in the chair alone, where Santa could approach the chair from behind and she wouldn't even know he was there. This seemed plausible, but the wool is not easily pulled over Papoose eyes. She was onto them like white on snow (heh) before the photog had her shot. At this point, apparently she was screaming bloody murder, her face was all red, and there were tears, real tears, people! Finally, in a last ditch attempt, the Husband sacrificed all ego and got in Santa's chair, holding the Papoose, while Santa tried again to sneak up from behind. She would have none of that. By this time she'd decided it was altogether a bad scene, but the photog did get one tearful shot, which I'm supposed to pick up this week. I'm a little afraid to see it.

The Husband had to call me from the parking lot to try to talk the Papoose down from hysterics over the cell phone. Apparently, she screamed all the way home, though by the time she was deposited in my lap, there was a nary a sniffle. I held her while she drank milk and ate comfort food in the way of a Mum-Mum or two, and all trauma was forgotten.

(Note to future therapist: I had nothing to do with this. It was all the Husband. Send him your bills.) 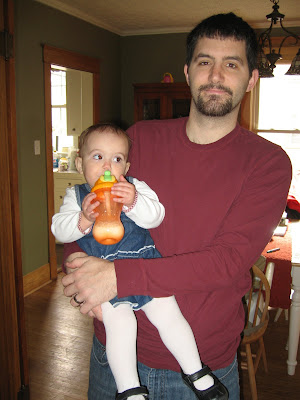 Finding comfort in the bottom of a bottle.
at 3:10 PM

It's all normal. give her a year or two and she'll be hitting on Santa. Okay, well let's hope not, but she won't be afraid forever. Maybe this will be one of the pictures you end up showing her senior prom date.

We have a classic shot of my sister M at about the same age, red-faced and hysterical in Santa's arms while we all stand next to him grinning. It's now a treasured family photo and M. has no lasting trauma. Although maybe that's why she chose to marry someone Jewish... hmmm... It's all coming together....

I think at her age, seeing a weird, big, bearded guy in red would be upsetting. I've heard of similar problems with some young kids and Mickey Mouse.