Or not, if you're like our Papoosekin. She should be 11 lbs by now. She's only gained 2.5 oz since the 2nd. She should be gaining 4-7 oz per week. I'm mildly concerned. I'm sure it's because she's been sick. She had a slight fever while we were in Tahoe and didn't eat well at all for a few days. She seems much more herself now, talking and smiling up a storm, and eating, but still congested and coughing.

She's been sleeping sitting up in her swing at night. She slept propped up in the bed with us most of the time we were out of town in Nashville and Tahoe, but I had to put the kabosh on that today. She tipped over on me twice today, both in unsafe ways. She was fine both times, but it has become clear that she is just a bit too wiggly for that to be safe any more.

So, our feeding problems never end. I discussed with Ouiser while visiting Nashville that I strongly suspect I produce skim milk and she produces heavy cream. Our children are living proof. So, we'll start supplementing with some formula again. Just a few ounces a day. And I have a few other tricks up my sleeve that I won't go into detail on here for fear of TMI, but am trying everything I can to fatten up the Liliputian (by the way, the Husband's cousin Wawa didn't know that reference, then accused us of being old...what are they teaching in schools these days? There. Self-fulfilling prophecy. I'm now old.). I'm also off dairy for at least a month to see if her problems are purely viral or might be a milk protein intolerance. Sigh. Wish us luck.

I have no time or energy to give you my life in review since my last proper post. But I can at least appease the Papoosekin fans with some eye candy. 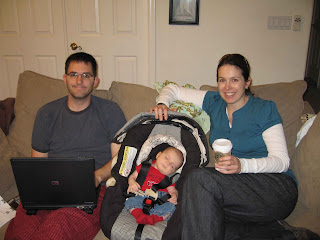 At 8 weeks...the whole fam. Taken when Toddler Tamer and crew were visiting. 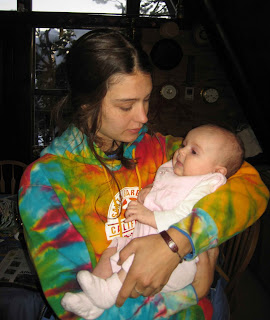 The Liliputian and her unofficial namesake. 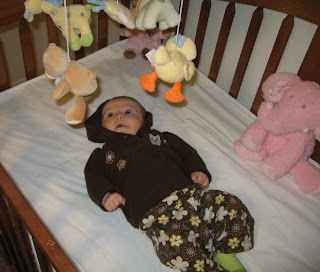 Discovering her mobile for the first time. Poor thing would have discovered it much sooner, I'm sure, but she's rarely in her crib. I tried to put her to bed in it last night, but it didn't take. We'll try again next week. Did I mention she's sleeping through the night now?!? Rejoice!!! We still have occasional off nights (like last night), but for the most part, she's been giving us 6-8 hours for a couple weeks now.

Really, it's been like magic. She hit that two-month mark and BOOM! Brand new baby. She smiles all the time now. I swear, a laugh is minutes away. She's sooooo into faces. She's officially discovered her hands and has them in her mouth half the time. She sleeps through the night, is awake during the day. It's like I finally have the baby I imagined having. We are officially at the end of the tunnel. I know there is plenty of rough road ahead, but I feel like I just finished the endurance test. Maybe some sleep will help the old immune system. 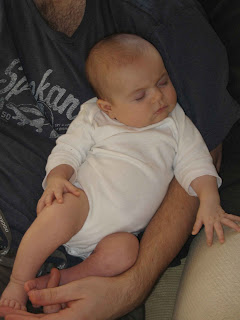 Speaking of sleep...there was lots of relaxing to be done while we were in Tahoe. And I totally mispacked. I spent weeks planning how I was going to keep her warm, bought some long-sleeve onesies, worried she wouldn't be warm enough at night especially. She spent much of her time there naked. Turns out that three boys who are overly interested in stoking the fires in the woodstoves kept it plenty toasty warm. I actually wonder if her fever was really a fever or just overheating from the high temps in the house.

I'm off to bed. We're done traveling for at least a few weeks now, so I'll try to be more punctual here in blogland. Night.

Good luck with the eating. Mom says when I was a baby I had a lot of trouble with formula and milk, and I had to go on soy for a while. I grew out of it, and I don't have any milk problems now. I don't know if she's too little for that, but maybe it's something to consider?

Glad she's sleeping through the night, and I love the pictures!

Hooray! You've got yourselves a sleeper. Magic.

And try not to worry too much about the weight thing - especially if she's been having trouble breathing because of a cold. It's hard to feed well when you're a baby with a stuffy nose. If my boys were anything to go by, she'll make up for it as soon as she's feeling better.

I don't even know what the blog post says - I'm far too busy squealing over the pictures. I can NOT get enough of them!! It's so funny that you can love someone so much and you've never even met them. Seeing pictures of her makes me crunch my face up and make high pitched noises!! I just wanna snuggle her!