Shave and a Haircut (or, "Holy Crap, That Doodle's a Poodle!")

Oh. My. God. I had no idea a haircut could be this traumatizing. A haircut on someone else. On a dog. I have spent the weekend stunned. In utter shock. I have a new dog. 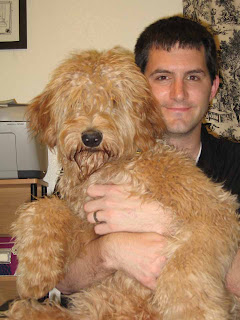 Let me begin with the Tucson heat, which picked up last week into the 80s already. During one of our walks, earlier in the evening, Chewy threw up when we got back to the house. Poor little guy either had some mild form of heat stroke or just drank too much water too fast or something. I felt awful. A fur coat in 85-degree heat is no fun. 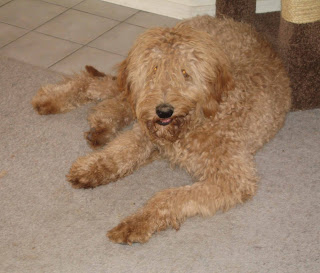 So we decided it was time to shave him for the summer, which we'd always planned to do. Most people with remotely long-haired dogs in Tucson shave them for the dog days [pun intended]. We thought we'd give it a go ourselves first, see if we could save some money, though we knew it probably wouldn't work. If it were that easy, no one would pay the groomers. 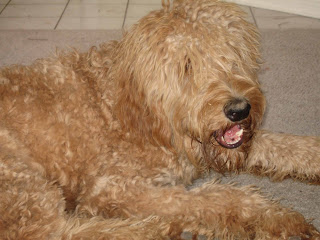 (sorry attempt at home-grooming; we didn't dare touch his face)

We were right. It did not work. Chewy was pretty well-behaved and tolerant of our attempts, but his fur is so dang thick the clippers kept getting stuck. We tried trimming him with scissors first to reduce the bulk before clipping. No dice. We finally gave up and made an appointment at the groomers.

The husband wanted him to get a mohawk, an idea stolen from a friend of ours, whose terrier Duncan rocks his own mohawk regularly. He also wanted a goatee and the feathers on the backs of his legs. I was fine with whatever. He's a dog. It's just fur.

We dropped him off and as we left I jokingly said to the husband, "I hope I recognize him when we get back." (FORESHADOWING! FORESHADOWING!)

When they called us to pick him up, I started getting really nervous. A feeling that only increased as we got closer to the groomer. We walked in and I saw a huge pile of his golden fur all over the floor. I knew it was going to be drastic. He came out and I swear to God I did not know my own dog! As the husband was trying to tell the groomer she forgot to leave the beard, I kept hissing at him, "Who is this dog? This dog is a stranger!", meanwhile, trying desperately to act normally toward Chewy so as not to freak him out, too! I didn't want him to feel he'd gotten a bad haircut. I was floored. I felt I didn't know him at all. I felt like I'd been given someone else's dog. I arrived with my fluffy, golden, sheepdog-looking goofball and got back a poodle. A poodle! 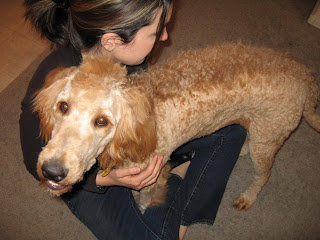 Yes, I know he's half poodle. Yes, I know we've always said how poodle-y he looks when wet. But do you see his face? That is the face of a poodle! I had no idea his face was that long and skinny and poodle-y. I had no idea he was such a poodle. I have a poodle. He was hiding in sheep's clothing (almost literally! Friends have called him a sheep!) for six months. 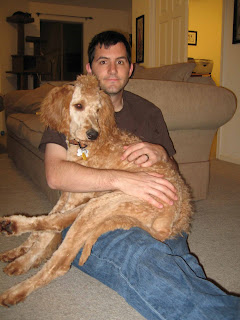 And I knew the second I got him home and got down on the floor with him and played with him and cuddled him that I'd know he was the same old Chewy. And of course I did and he was. But, man, what a shock. And now that I'm used to it, I think the mohawk is cool. Fits his goofball personality. And I think he's much cooler temp-wise, and more comfortable, which is the whole point. I've been threatening the cats with a mohawk next. 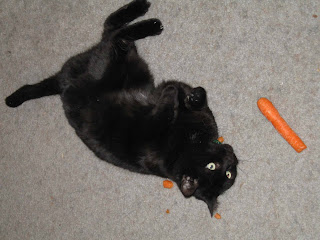 And, incongruously, here's a shot of Puck rolling in the carrot bits that Chewy started to eat, then abandoned. Maybe the heat's getting to him, too. He's lost his head completely. Mohawk for you, too, Puck!
at 10:58 PM

Since you two are always comparing your experiences with Chewy to J, I find it fitting that they both had their first haircuts in the same week! We had to get rid of the mullett and thought very seriously about a mohawk, but I couldn't do it to him in the end. I loved your build-up to this ending! Don't worry. It will all grow back!

I already emailed you my comments about Chewy, but I just wanted to show you that I finally signed up for a Gmail acct. so I can leave you (and the others) real comments now!! One small step closer to the land of blogs...

I can't tell you how readily I relate to your shock. The first time we had Otis (the half poodle) shaved, I felt the same way. I only really recognized him by his collar. Funny thing is: now we think he looks funny with hair. I think Chewy looks great- and seasonally appropriate. Oh, and I'm loving the mohawk.

My friend's cockapoo, Rosie, gets shaved every so often to the same effect. Chewy will fuzz up again. Maybe you can keep him in that George-Michael-permanent-five-o'clock-
-shadow phase, although that might take more grooming. Then he'll be fuzzy but not entirely poodle-y. I have to admit as well, as I saw the pics I thought, "What dog is that?" But I know it's Chewy underneath!

Do you think if the real Chewbacca went to the groomer's he'd look similar?