When a Role in the Grass Turns Deadly (or, Growing Up Omega)

No sewing today. Very disappointing. I got caught up in my own personal brand of cleaning, which is very disjointed and impulsive, usually involving ranging from one room to another, dropping tasks mid-completion as I am distracted by new disorder. What started out as folding laundry ended with reorganizing the kitchen and plans to make curtains for the bathroom. The laundry remains half-folded. So, Chewy's bed and the dress remain half-sewn.

Chewy graduated from his intermediate training class today. By the skin of his teeth. Which is my fault, not his. We missed last week's class. Just completely spaced it. So I had no idea what to prepare for graduation and instead chose wisely to do nothing with him for two weeks so as not to overtrain him. I did a good job of that and he was very convincing in his role as he pretended to suddenly not even know his name, never mind "go to bed," "roll over," or "settle." Whatever. He had fun. Won a couple of balls. Got some treats. It was doggy heaven. No graduation picture this time, though, sorry.

I do have some new kitty pictures. Here's a frame-by-frame of a feline drama I recently witnessed: 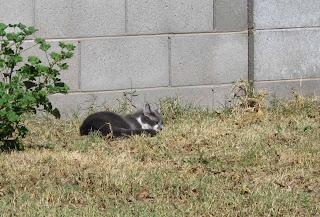 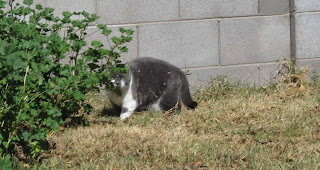 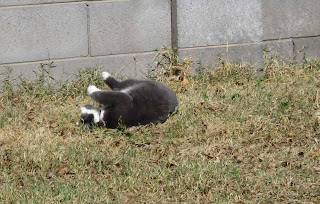 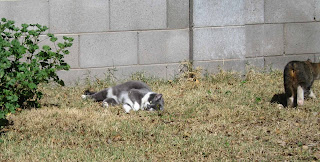 I know...I was scared there near the end, too. I hear Lita's up for leading omega, while Bob has been nominated for her cameo. I'm so lucky to have two kitties in the biz.

Who out there is as in love with the Target dollar racks as I am? I scored a couple of major finds last week: 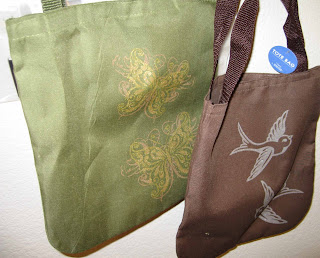 The pirate headband goes with the pirate ring, the pirate necklace, and the pirate earrings I also bought. I am a fully accessorized pirate. It's never too early to plan for Halloween. And I've already worn the camo headband twice and gotten compliments. Compliments, people! On a camo headband! That cost $1!! I didn't know I could pull off such a feat. Soon I'll get around to doing something with the tote bags other than stare at them. I'm not sure what because they're too nice to put with my grocery tote stash, but I don't know how well they'd work as actual purses. Maybe they'll tote someone's gift to them in lieu of wrapping paper? Come on, who's due for a gift? Speak up. The best score of all from the most recent Target spree has yet to be named as it is Easter-related and I don't want to break out the Easter blogs before St. Paddy's. That would be so Christmas 2006. You'll have to wait.
at 10:55 PM

I follow exactly the same clening methodology! Only with checking e-mails/blogs thrown in..

Hmm, no wonder my house is a mess.

Why why WHY are you not on my blog list?

I am SO going to add you today.