Quick post this morning. I had planned to post yesterday, as it was a day off from work for me, but I made a vow to myself that I was going to spend the whole day in my sewing room. I've just been longing to be able to do that for so long now and after being at work six days last week, I decided yesterday was the day. So there was no time for blogging. And now I'm getting ready for work again, so only have time for a quick post.

I finally finished Chewy's crate mat. I didn't take a close-up picture, but it's just straight line-quilted. The back is the same as the front. I inserted ties so it won't get all bunched up in one corner as he wiggles around in there. He may, of course, eat the ties. There's just a single layer of low-loft batting in there, so it's not that padded, but I'll be making him a real bed for the living room soon. 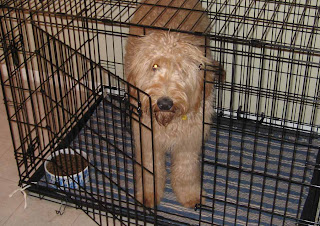 My current WIP is a dress for die Frau's wedding in April. This is the first dress I've made that wasn't a halloween costume. The first real clothing I've made at all, now that I think about it, because the pajamas I've made were not really on the same level as this. Here's a shot of the fabric I'm using. It's actually a home decor fabric, kind of heavy, so I'm hoping it won't be too heavy. The pattern I'm using is a Vogue, can't find the pattern on-line and don't have time to run and get the number for you right now, but I'll try to remember in a later posting. Anyway, it's supposed to be an easy one, an a-line with princess seams, strapless with boning, which I've also never used before. I've gotten as far as sewing all the panels together with the zipper in. My first invisible zipper and it turned out really well! And the thing mostly fits. Perfect in the hips, a little big in the waist and bust, no surprise to me there. So I still need to put in the facing and boning and struggle with the adjustments which will be the hardest for me, I predict. I understand how to take in the panels that are otherwise done at this point, not so clear on how to adjust the facing to match... 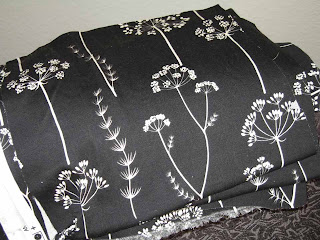 I am so flattered that my wedding is the occasion for your first dress! I'm sure it will be bee-yew-tee-ful. FYI, I am NOT making my wedding dress. Not even close.