Holy cow, November! Hi! So...I thought I was back in the blogging world, and then...well, October kind of got away from me. The way a raging bull on a shoestring leash would get away from me. There is so much I need to talk about here that I'm almost too intimidated to even start. So, let's just go with some distractingly cute pics of the Papoose from Halloween and call it a day. 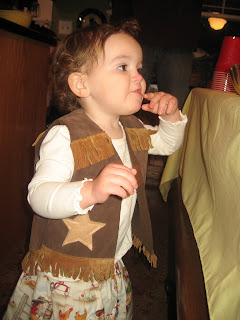 She was a cowgirl, of course, since the Earth revolves around all things "horsie." No, I did not make the skirt, but I did make the vest. And I was extra proud of myself for totally winging it with the vest...no pattern, no plan, no trip to the fabric store. It fit perfectly and totally made the outfit. She wouldn't wear a cowgirl hat, but she was wearing cowgirl boots. And she had a horse, she just refused to carry it. 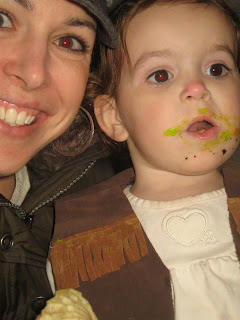 Oh, and the green frosting? Wasn't aware of it until I saw the pictures. The pink nose? Leftover face paint from a Halloween party at Verizon that morning where they painted her as a cat. Cute, but she later looked like she had a cold! 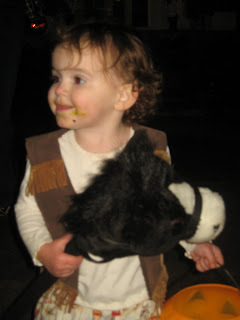 I'm pretty sure this was the only time she held Biscuit, the horse, all night. It mostly rode, inexplicably, inside Mr. Ouiser's shirt all night. Don't ask me; you'll have to take that one up with the Ouisers. 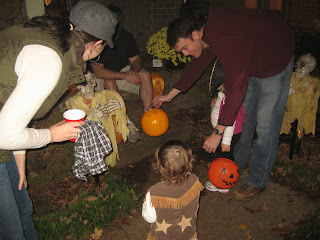 A good shot of the back of the vest. 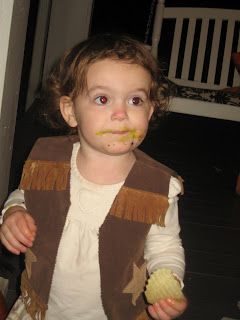 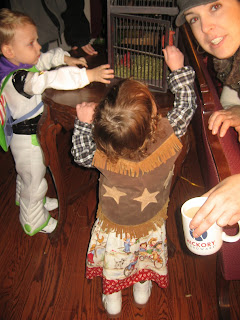 Another good shot of the back.

We handed out candy across the street at our friends', Ouiser's aunt's, house for a while before trick-or-treating around our neighborhood with the Ouisers. The Papoose gave some candy out herself, after much pep-talking. She very clearly wanted to do it, but when confronted with a big kid right in her face...well, we were proud of her.

Our neighborhood is a MAD. HOUSE. on Halloween. It was last year, too. Like no place else I have ever seen in all my 31 years of Halloweening. It's probably the nicest, safest neighborhood in our area, so I understand why, but criminey. I bought even more candy than last year and we still ran out. The Papoose learned to say "Trick or treat" by the third or fourth house, and also said "Thank you" and "Bye-bye" with minimal prompting.

After we put the girls to bed, the Husband and I and Mr. Ouiser hung out by the fire pit at the aunt's house for a while, relaxing and talking. It was great. That fire pit is great. It has a chimney so you don't smell too much like campfire afterwards and it's just perfect for pulling some chairs up to, roasting some hot dogs, and having some drinks.

The only thing missing was costumes for me and the Husband. Dude, I just CANNOT get the Papoose's costume and birthday party AND costumes for us planned all at the same time. But after three years of no Halloween parties to go to and no costumes for us, I'm done. Mark my words, next year, I MAY throw my own party, and we WILL have costumes because I WILL start planning earlier. Consider that my Feast of Samhain resolution. (Is that the right feast for this time of year? Dad?)
at 11:46 AM

I am SOOO impressed with the vest!! The stars, the fringe, it all looks so professional! Your craft readers want more details, please!

Ditto on the amazing vest! What a cutie!

Adorable! But I'm wondering what was in your cups in those two pictures? Was it a fun Halloween treat?

It's just so nice to hear your "voice" again!