Two weeks ago, the Husband and I drove from my parents' house in Upstate New York to our ten-year college reunion. The Papoose and I spent the week and a half prior to that hanging out with them for a little country vacation. We played in their giant yard, drove around looking at cows and horsies (the current faves around here), and spoiled the Papoose with cookies and popsicles. 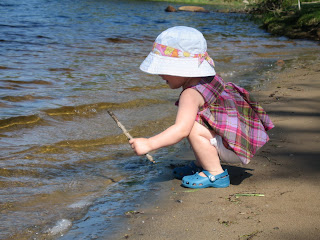 On the shore of the Saranac River. Before she fell in. 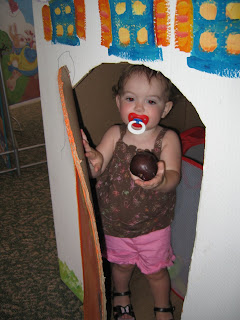 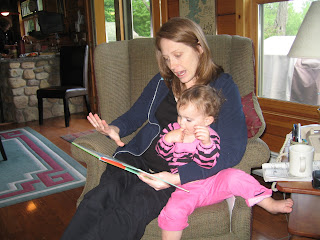 My parents kept the Papoose for us for the two nights we were at Reunion. I think she surprised us all at how well she did for her first nights away from us. And we were able to enjoy the first morning since she was born that we were both able to sleep in. We had an amazing time with all our friends, proved that we were, in fact, not still 20 years old, and that Slices is still the best food one can find after midnight.

For the record, I flew to NY with the Papoose by myself. The Husband couldn't take that much time off work. About a month before the trip, it started to sink in that I had signed up to take this flight by myself with a toddler. And not just any toddler. An extremely busy, high-maintenance, strong-willed, and impulsive toddler. And I planned to keep her on MY LAP. For 11 hours of travel. Yeah, RIGHT!!! 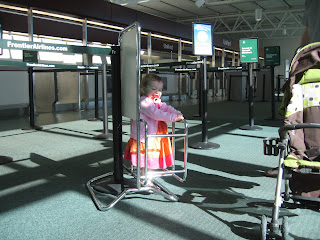 I bought her a ticket for her own seat. Best. Thing. I've ever. Done.

On the way home, I had the Husband with me, but still no seat for the Toddler. He had restained himself nicely from complaining about the money I spent to buy her a seat on the way out because I was flying by myself and he knows about The Anxiety. But I knew he secretly thought it was a waste of money. The trip home with her, even though there were two of us, was pretty much awful, but with the silver lining that he is now 100% sold on never flying with her again without her own seat. You just CANNOT keep a toddler in your lap for that long. Not ours anyway. It's impossible.

Did I mention that the flight up there, without the Husband, when she had her own seat, a woman from our flight came up to me in baggage claim and went on and on about how the Papoose was the most well-behaved child she had ever seen anywhere, ever? No, well, we'll just be modest then. The secret is that it had nothing to do with her behavior; it was all about having that extra seat.

A word to the wise though: Be prepared to be your own sherpa, schlepping a toddler, stroller, carseat, and two carry-on bags through the airport. It is somewhat of a super-human feat. Making me Supermom? That illusion has a nice ring to it...
at 12:36 PM

You are, indeed, Supermom.

Just remember when she gets older, you can use the "bring whatever you want, but YOU have to carry it" rule. Worked with all of us.