It's been over a week and I've been dying to blog, but just hadn't been able to find time until now. Last night, especially, I wanted to blog, but I was as exhausted as the new puppy! We've named him Chewy, both because that's all he seems to want to do and because he kind of looks like Chewbacca, in a good way, and much smaller (for now). 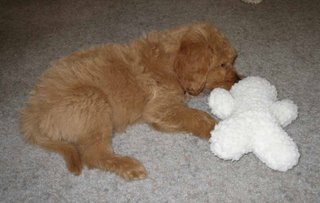 I almost had a heart attack picking him up from the airport. We had to go to the cargo area, which is a whole separate building from the terminal...and they didn't have him. And they didn't know where he was. We called the breeder--no answer. DH calls the airline and had to sit through literally about 8 minutes of recording before a live person would talk to him. Meanwhile I'm panicking that either we were scammed out of our money and there is no puppy, or he's been mistaken for baggage and is dying of heat stroke as we sit there, or he was left behind and never made it on the flight. Turned out to be that last worry. He missed his connection in Houston. Air travel's not easy these days for any of us. 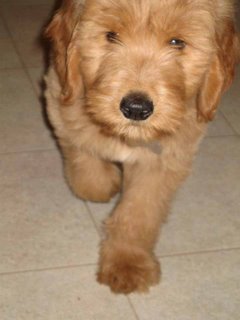 They got him on the next flight. We went and had lunch, came back about an hour later and he was there! Of course, he's the most precious thing I've ever seen in my life. I was in love with him before I even met him, but those first moments sealed the deal. He was really quiet and still at first--I'm not sure if the breeder drugged him for the flight or if he was just in shock. We took him out of his air crate, put his collar on immediately, then set him in a cardboard box with some towels and a Nylabone for the ride home. The second he set paw in the box he was all over that bone like white on rice. Not a peep out of him the whole way home, just gnawing on the bone, the box, the towel, back to the bone, etc. 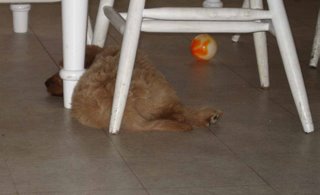 He already seems to know to go to the door when he wants to go out, though that doesn't always mean he wants to go do his business. But at least he's learning that if he stands there, we'll let him out. He had one accident when he first got here, then another while I stood there saying, "I wonder if I should take him out right now?" Yup. Should have. And then two more that were also not his fault, but a result of DH hesitating a moment too long. But we're all getting there. I'm attaching some bells to a ribbon to hang on the door. Supposedly you can train them to ring the bells when they need to go outside. Then you just need to teach only to ring when they need to go, not just because they want to go. 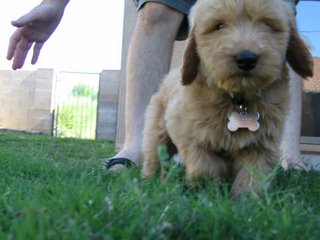 Some friends are coming over tonight for barbecue, and one is bringing her two puppies, so we're starting the socialization right off the bat. 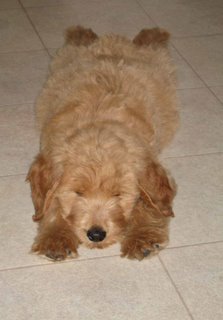 I had a moment last night that reminded me of Ouiser's "Is this really my life?" post. Earlier in the day, we could tell Chewy was hungry, and we'd bought raw chicken wings for him, per the breeder's instructions. They were dethawed. I put three in his bowl, exactly as the breeder had instructed us, showed it to him, and he wouldn't go near them! He acted like he was afraid of them and kept backing away. With encouragement, he licked them, so we knew he liked something about them, but we couldn't figure out what the problem was, so we gave him some kibble, which he ate promptly. 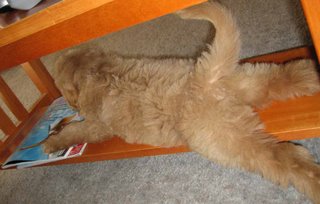 Then later that night, he was hungry again, so we tried again with the chicken wings. Same reaction. Then I remembered that the books I read on raw food diets said sometimes dogs don't know what to do with the bones. I didn't think of this at first because the breeder said he's already been eating chicken wings with no problem. Anyway, one of the solutions is supposed to be to hand feed it to them. So we cut up the bones, stripped some of the meat off, sat on the floor with Chewy, DH holding pieces up one at a time for him to work on. That did the trick! The dog immediately turned into a ravenous carnivore. It was a bit terrifying for both of us watching him swallow actual bones, having grown up with dogs and being taught over and over by our parents how deadly bones are for a dog. The trick is, those are cooked bones. Raw bones are apparently safe because they're more pliable. And the calcium in the bone and all the nutrients inthe marrow are supposed to be very good for him. And Chewy didn't try to gulp any, true to his name he worked forever on those things until you'd finally hear it crunch and down it would go. You could almost hear his jaw muscles getting stronger. 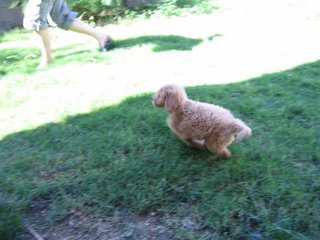 Anyway, he ate three wings in total last night. I offered him kibble this morning for breakfast while DH was still sleeping, and he wouldn't eat it. Since the raw food thing is currently a 2-person job, he still hasn't eaten yet today (DH had a meeting for school) and it's almost noon. But he's been offered kibble repeatedly, so the boy's not starving. Anyway, I guess he's into this raw food thing, so we'll give it a whirl. 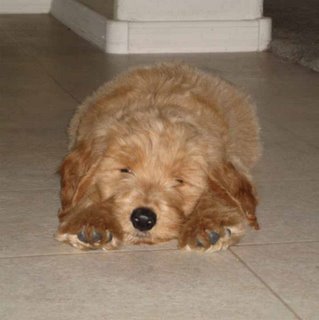 What a sweet little fur ball.

I love him! We are trying to tell Otis that he has a new friend, showing him pictures of Chewy, but he doesn't get it.

He is absolutely adorable, and he sounds like a hysterical little ball of energy. As for the Nylabones, those are all Otis ever really wanted. We spent a fortune on those at the beginning...

Hope you're having a blast!

That is the cutest little bundle of puppyness I have ever seen. So precious!